Cells are the structural and functional units of living organisms. They carry out basic functionalities of our body. A cluster of these specialized cells functions together to form a tissue. Plants and animals have different tissues. In animals, there are four types of tissues namely:

Let us have a detailed overview on nervous tissue, its structure and function.

What is a Nervous Tissue?

Nervous or the nerve tissue is the main tissue of our nervous system. It monitors and regulates the functions of the body. Nervous tissue consists of two cells: nerve cells or neurons and glial cells, which helps transmit nerve impulses and also provides nutrients to neurons. Brain, Spinal Cord, and nerves are composed of nervous tissue, they are specialized for being stimulated to transmit stimulus from one to another part of the body rapidly.

The nervous tissue is located in the peripheral nerves all through the body and also in the organs of the central nervous system such as the spinal cord and the brain. The nervous tissue consists of the nerve cells or the neurons. Neurons are specialized cells that react to stimuli by generating signals through the axons, which are elongated structures arising from the cell body. 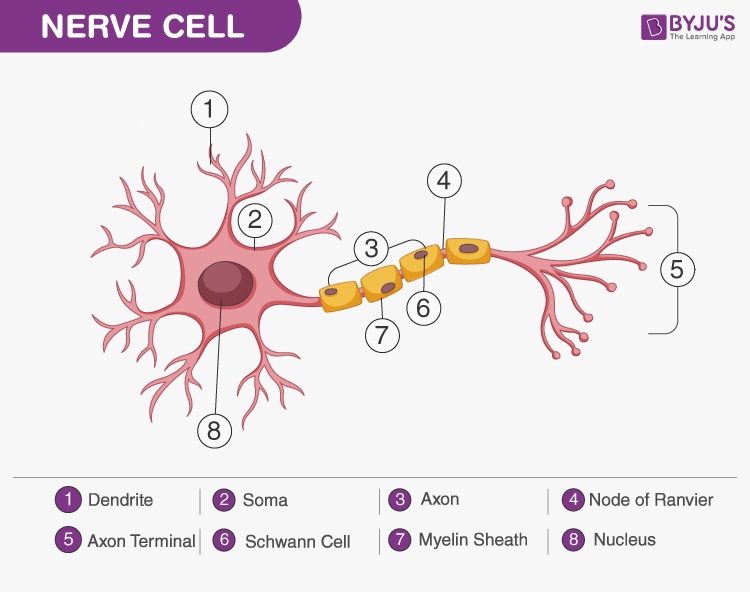 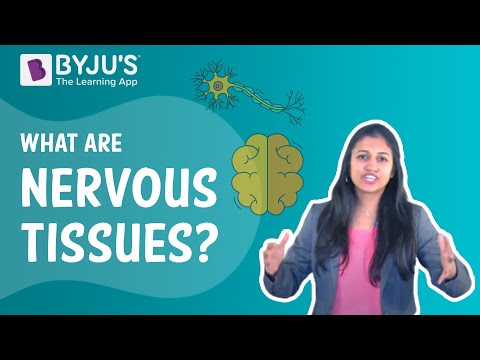 The signals that are generated and initiated in the CNS(central nervous system) which typically arise from the brain and in some cases, the spinal cord, approach the outer edge to sites, for instance, the internal organs or limbs which conduct the specified organ of interest to take appropriate action. Responding to the nerve impulses, suitable actions take place such as contraction of a bicep muscle, retracting your hands from a hot cup of tea, the hair on your arms may raise due to extremely cold conditions, responding to light striking the retina, when one of the sense organs receive an input that may cause danger, etc.

The functioning of the nerves is brought about by channelling electrochemical signals or impulses that are obtained from the other nerves or brain or tissues or organs at which the nerves end. On the basis of functionality, nerves can be classified into the following:

Motor neurons or motor nerves are responsible to send signals or impulses all the way from spinal cord and brain to all the muscles of the body. The impulse enables humans to carry out basic activities such as talking, walking, drinking water, blinking eyes, sitting, sleeping, etc. Damage to the motor neurons can cause muscle weakness or shrinking of the muscles. The nerve that passes from the lower back to the buttocks is known as the sciatic nerve. The sciatic nerve enables the complete leg to move which is a collection of various nerves. A few of these motor nerves function in the hamstring, feet, thighs, and feet.

The sensory nerves or sensory neurons are responsible to generate impulses or signals in the contrasting directions from another type of nerves known as the motor neurons. The sense neurons gather information such as pressure, pain, temperature, etc from the sensors that are present in the muscles, skin and other internal organs which in turn redirect it back to the brain and spinal cord. These sensory nerves have the potential of communicating information relating to motion (except for the eyes, as they themselves do it). Damage to the sensory nerves can cause numbness, pain, tingling sensation and hypersensitivity.

The autonomic nerves system controls the actions of the muscles of the heart, such smooth muscles located in the stomach and in the interlining of glands and other organs. The autonomic nerves regulate the functions that are not under control, i.e., involuntary. There are two functional divisions in the autonomic nervous system, namely:

The cranial nerves are crucial in smell, vision, movement of the face and eyes, movements of the tongue and salivation.

For more information on Nervous tissues, its characteristics and functions, or any other related topics, please register at BYJU’S.

What is the main function of nervous tissue?

The main function of nervous tissue is to receive stimuli and send signals to the brain and spinal cord. These signals are sent to the muscles via the nerves.

What is a nervous tissue composed of?

A neuron is known as the nervous tissue. It comprises three parts: