“Neurons are the fundamental unit of the nervous system specialized to transmit information to different parts of the body.”

What is a Neuron?

Neurons are the building blocks of the nervous system. They receive and transmit signals to different parts of the body. This is carried out in both physical and electrical forms. There are several different types of neurons that facilitate the transmission of information. 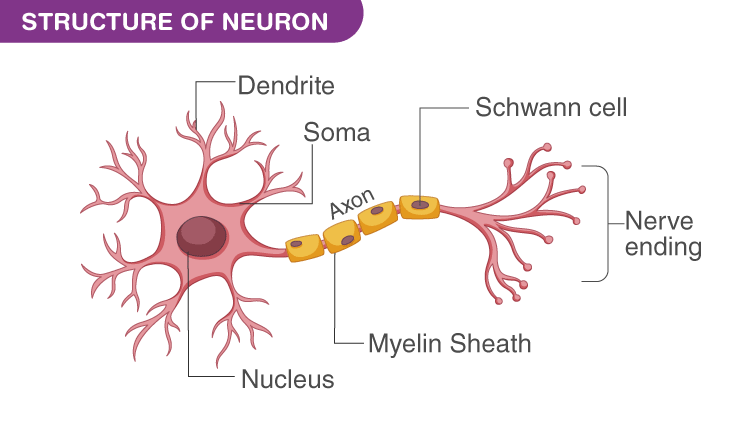 A neuron varies in shape and size depending on its function and location. All neurons have three different parts – dendrites, cell body and axon.

Following are the different parts of a neuron:

These are branch-like structures that receive messages from other neurons and allow the transmission of messages to the cell body.

Each neuron has a cell body with a nucleus, Golgi body, endoplasmic reticulum, mitochondria and other components.

Axon is a tube-like structure that carries electrical impulse from the cell body to the axon terminals that pass the impulse to another neuron.

It is the chemical junction between the terminal of one neuron and the dendrites of another neuron.

There are three different types of neurons:

They are multipolar in structure. Their axons connect only to the nearby sensory and motor neurons. They help in passing signals between two neurons.

The important functions of a neuron are:

When two neurons are connected by a gap junction, it results in an electrical synapse. These gaps include ion channels that help in the direct transmission of a positive electrical signal. These are much faster than chemical synapses.

What is a neuron?

Neurons are the structural and functional unit of the nervous system. All neurons have three different parts – dendrites, cell body and axon. The neuron structure is specially adapted to carry messages over large distances in the body quickly in the form of electrical signals.

What are sensory neurons and motor neurons?

Name the part of the neuron

a) Where information is acquired.

b) Through which information travels as an electrical impulse.

a) The part of the neuron which helps in the acquisition of information is known as the dendrite. They are tree-like structures that are designed to receive communications from other cells.

b) The part of the neuron through which information travels as an electrical impulse is known as the axon of the neuron. Axons mostly are covered with Myelin Sheath which increases the speed of signal transmission.

What is a synapse?

A synapse is the site of transmission of nerve impulses between two nerve cells (neurons) or between a neuron and a gland or muscle cell (effector). It is also known as a neuronal junction.
Test your Knowledge on Neurons!
Q5