What is Central Nervous System?

The brain is the most important organ which is divided into three parts:

The brain has approximately 30 per cent of oxygen. It interprets information from the five senses in a body along with the internal organ stomach. The Central Nervous System sometimes also includes the retina, optic nerves, olfactory epithelium and olfactory nerves as they connect directly with the tissues of the brain without any connecting nerve fibres. On the other hand, the spinal cord acts as a bridge between the brain and the body. Thus, if the spinal cord is injured or affected, the flow of information will be interrupted. 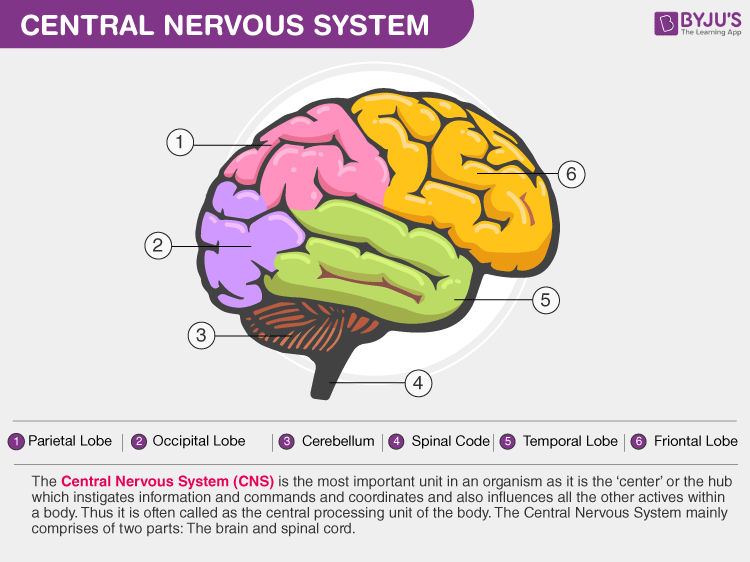 Cells of the Central Nervous System

There are various cells that act as the major unit to help in the function of the Central nervous system properly. Of which neurons, dendrites and glial cells are the major ones. These cells are connected to the brain where all the information is stored and enacted.

Neurons are the fundamental unit of the brain which is responsible for processing and transmitting information to other nerve cells, glands, and muscles. There are about 100 billion neurons where each neuron consists of a cell body and an axon and dendrites create the extensions.

They are the specialized form extensions from the cell body which function to receive information from various cells and carry that information back to the cell body. Thus dendrites are often known as processes.

There are basically three different types of glial cells that function to provide the neutrons with metabolism and mechanical supports. These cells are: