Our body needs proteins, vitamins, fats, and many other nutrients for the proper functioning of our body cells, tissues, and organs. Among all these nutrients, proteins are called as the building blocks of life as it is the main source of energy and also helps us with the muscle contraction, formation of bones, skin, blood cells, etc.

“Marasmus can be defined as a form of nutrition deficiency disorder, usually occurring in children. It can be life-threatening if not diagnosed at an early stage.” 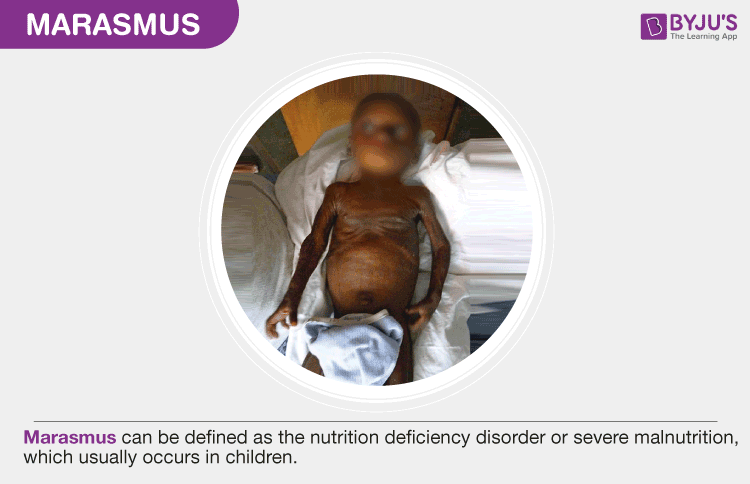 As mentioned above, it is a nutrition deficiency disease and is mainly caused by:

Other causes of marasmus include:

The risk factors for marasmus include:

This deficiency disease can be diagnosed by the physician through a physical examination such as:

The first and primary treatment prescribed for the patient suffering from marasmus includes:

Prevention and Safety Measures for Marasmus

Marasmus is a life-threatening nutrition deficiency disorder which may also lead to death if the symptoms are ignored. Complete recovery can take a month together even with proper diet and medication. Along with the treatment, the patient should also take some preventive steps like:

What are the different types of malnutrition?

The different types of malnutrition include:

How is Marasmus caused?

Marasmus is caused due to the deficiency of nutrients such as protein, carbohydrates, calories. It mainly occurs due to poverty and food scarcity.

What are the symptoms of Marasmus?

Loss of body weight and muscles are the main symptoms of Marasmus. This leads to an extremely low body mass index (BMI). Other symptoms include dizziness, energy loss, brittle hair, and dry skin.

How is Marasmus different from Kwashiorkor?

Which is the most common form of malnutrition?

Protein-Energy Malnutrition is the most common form of malnutrition. Marasmus and Kwashiorkor are two forms of protein-energy malnutrition.