What is the Phylogenetic Tree?

The phylogenetic tree can also be defined as the two-dimensional graph representing the evolutionary relationship between an organism from various other organisms.

The phylogenetic tree is also called the “Tree of Life” or “Dendrogram” The idea of a phylogenetic tree arose from an ancient concept of a ladder-like progression from moderate to powerful forms of life. The term Phylogenetic or Phylogeny is derived from the ancient Greek word, which refers to race, origin or lineage.

Construction of the Phylogenetic tree

There are two different methods based on which the phylogenetic tree is constructed.

This method is based directly on the sequence characters, therefore it is also called the discrete method. The character-based method uses the aligned characters for constructing the phylogenetic tree.

These aligned characters include either the DNA or protein sequences during the tree inference. The two most popular character-based methods are:

This method is based on the amount of the distance or the dissimilarity between the two aligned sequences. In this method of constructing the phylogenetic tree,

used for building a tree.

Steps for preparing the Phylogenetic Tree

Selection of an organism or a gene family

Construction of a Tree

Evolution of a Phylogenetic Tree

Make the inference about the most common ancestor of the leaves or branches of the tree. 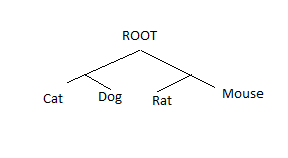 This tree has a maximum of two descendants arising from each of the interior nodes.

This tree has multiple descendants arising from each of the interior nodes.

It is the fundamental tool to derive their most-useful evidence from the fields of anatomy, embryology, palaeontology and molecular genetics. Other significances of the phylogenetic tree are:

This article concludes an introduction to phylogenetic trees, their types, and their importance. To know more about the phylogenetic tree, other related topics and important questions, keep visiting our website at BYJU’S Biology.