We can find many things around us, from mountains and oceans to plants and animals. The earth in which we live is made up of several things.  These “things” can be categorized into two different types – Living and Non-living Things.

Living things have “life,” though some might not show its evident signs. For instance, a tree would probably not react the same way a human would. It would not react when we hit it, and it might not be able to walk around. Though the signs of life displayed by them are not very observable, it does not make them non-living.

Let us have a detailed look at the important characteristics of living and non-living things and the difference between the two.

Living things exist and are alive and are made of microscopic structures called cells. They grow and exhibit movement or locomotion. They experience metabolism, which includes anabolic and catabolic reactions.

Living things are capable of producing a new life which is of their own kind through the process of reproduction. Living things have a particular life span and are not immortal.

Cellular Respiration enables living organisms to acquire energy which is used by cells to perform their functions. They digest food for energy and also excrete waste from the body. Their life cycle can be summarised as follows – birth, growth, reproduction and death. 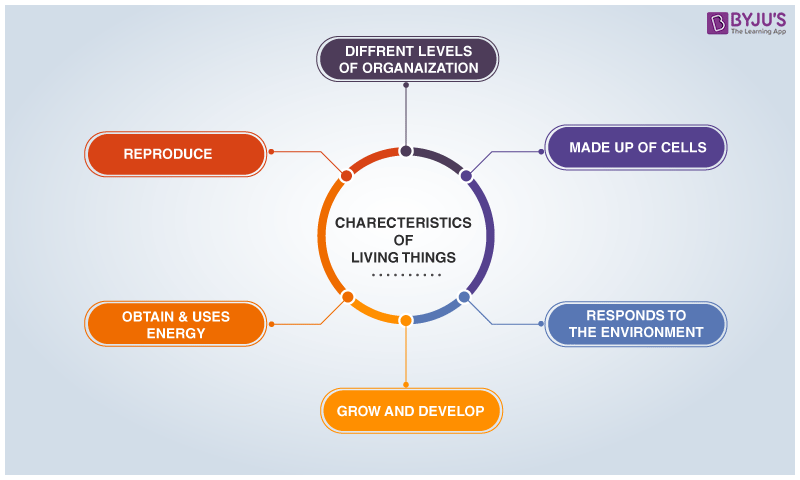 Following are the important characteristics of living things:

Non-living things do not have a life span. They do not respire as they do not require food for energy and hence do not excrete. They do not fall into any cycle of birth, growth or death. They are created and destroyed by external forces.

The important characteristics of non-living things are mentioned below:

Difference between living and non-living things

Here are some of the major differences between living and non-living things:

For easy differentiation between living things and non-living things, scientists have come up with traits or characteristics that are unique to them.

Things which have no life in them are considered non-living.

Scientists have discovered a few criteria for differentiating living things from non-living things.

Here are some of them:

If something obeys a few of the rules, it cannot be categorized as a living thing. It has to follow all the given rules stringently. For example, an icicle, although it grows (increases its mass or length), is still a non-living thing since it cannot reproduce or respond to stimuli.

Non-living things do not have any of the life processes, unlike living beings.

Also Read: What is Living