In the year 1665, Robert Hooke, an English researcher observed the fundamental unit of life through his coarse compound microscope. He coined the term “cell”, which was based on the Latin word called “Cella,” meaning, small rooms.

Later, many scientists contributed to Robert Hooke’s findings and eventually, the Cell Theory was postulated. As technology progressed, modern interpretations of Cell Theory have been formed, with new tenets and revisions of the existing ones.

In 1863, a Swiss biologist named Rudolf von Kölliker coined the term “Cytoplasm,” but it was regarded as a synonym for protoplasm. However, the term gradually changed its meaning to the current definition of the term “cytoplasm”.

The fluid that fills up the cells is referred to as the cytoplasm. It encompasses the cytosol with filaments, ions, proteins, and macromolecular structures and also other organelles suspended in the cytosol.

But new research suggests that the traditional definition of cytoplasm is no longer valid. Decades prior, it was considered to be a fluid-like substance, but new evidence reveals that it is similar to glass-forming liquids.

The cytoplasm in the eukaryotic cells associates with the cell contents except for the nucleus. But in prokaryotic cells, as they do not possess a defined nuclear membrane, the cytoplasm possesses the genetic material of the cell. The cells, in comparison to the eukaryotes, are smaller and have an uncomplicated arrangement of the cytoplasm. 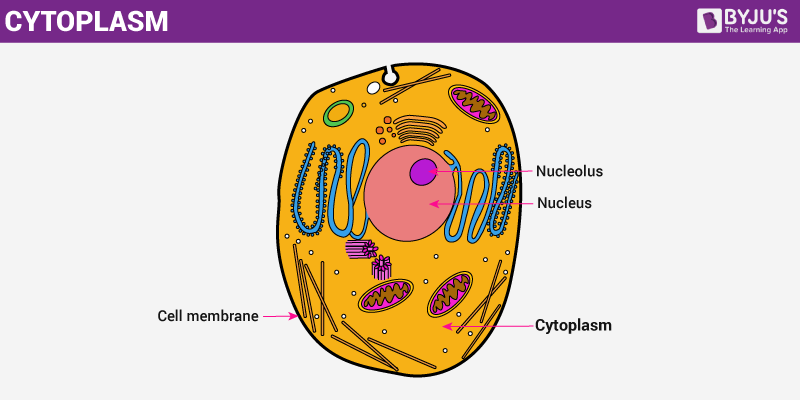 The cytoplasm is a fluid-like substance that fills up the cells. Cellular organelles and structures are suspended in the cytoplasm.

Cell organelles are various structures existing inside cells. All these structures are distinct and perform specific functions. Cells have three main elements i.e., plasma membrane, and cytoplasm and the nucleus.

The plasma membrane or cell membrane is a bi-lipid membranous layer, parting the cell organelles from its outside environment and from the different cells. It is the external covering of a cell where all different parts, including cytoplasm and nucleus, are enclosed.

Next, is the nucleus, one of the biggest organelle. They have exclusive control of a cell. Lastly, the cytoplasm is a jelly-like material in which the cell organelles are implanted.

The cytoplasm is an essential component of the cell. It is a semi-liquid jelly-like material, which joins the nucleus and the cell membrane. In the cell, the cytoplasm is embedded, while other cell organelles such as endoplasmic reticulum, mitochondria, ribosomes, vacuoles, etc. are all suspended within it.

It can easily be examined under a microscope through the staining technique. Functionally, it is the site for several chemical reactions within a cell. Most of the cellular metabolism takes place here.

The whole cellular content of a living cell is called protoplasm. The cytoplasm, nucleus and all other living components of the cell together make up the protoplasm of a cell.

The primary component of the protoplasm is the cytoplasm which is situated between the nucleus and the cell membrane in the eukaryotic cells. It contains all the organelles. It regulates the environment of the cell and maintains the cell shape. It stores the substances and chemicals that are necessary for the organelle.

The second component of the protoplasm is the nucleus, which contains the genetic material of an organism and is situated in the nucleus. The nucleus contains the ribosomes that are required and are crucial for the protein synthesis in the cells.

But in the case of prokaryotes, the nucleoid is present in place of the nucleus, wherein all the genetic information is present. However, it does not have a nuclear membrane; hence, the term protoplasm does not apply.

The elements that make up the protoplasm are fats, proteins, enzymes, hormones, etc. which are either suspended or dissolved in the fluid component of the protoplasm.

The nucleus is an important element of the cells. It is a membrane-bound organelle that is typically found in the eukaryotic cells. Eukaryotes usually have a single nucleus, whereas some cell types do not possess a nucleus (RBC-Red Blood Cells).

Learn more in detail about the cytoplasm, its structure, functions, other cell organelles and other related topics at BYJU’S Biology

The cytoplasm is the fluid present in the cell enclosed within the cell membrane that comprises water and enzymes, salts, and various organelles.

What is the important function of cytoplasm?

The cytoplasm is responsible for holding the components of the cell and protects them from damage. It stores the molecules required for cellular processes and is also responsible for giving the cell its shape.

What would happen if the cell had no cytoplasm?

A cell would be deflated and flat and would not be able to retain its shape without the cytoplasm. The organelles will not be able to suspend in the cell.

What would happen if there was no nucleus in the cell?

The nucleus contains the hereditary material and is responsible for cell division. It is known as the brain of the cell and controls all its activities. Without a nucleus, the cell will not be able to perform any activity and will eventually die. There will be no replication and no synthesis of proteins.

What is the charge in the cytoplasm?

What is the pH of cytoplasm?