You must have seen in fantasy movies wherein the person’s bone has disappeared. The arm starts bending without a bone and flapping around like rubber. That’s all about movies, but practically that’s because, without a skeleton, we cannot keep our shape intact.

Even cells need something to keep their shape intact, which is a cytoskeleton. The word cyto refers to ‘cell’ and cytoskeleton means the cell’s skeleton. The cytoskeleton forms a  framework to the cell. It is highly flexible and organized. It may not appear exactly same as our skeleton, but some parts of it act just like our bones, and some of them like our muscles.

The cytoskeleton functions similar to our skeleton. It provides an organized support to the structure by which the cell has its shape, moves, and stay protected from unwanted interference. The effect of outside interference and forces is known as mechanical stress.

For example, if two people are tugging your arms in two different directions, the characters involved in this activity produce mechanical stress. You do not split in half since your skeleton and muscles prevents the force from happening so. Similarly, the cell resist any changes in shape due to its cytoskeleton.

Cytoskeleton also supports the cell membrane. It helps in splitting up of chromosomes evenly in cell division and involved in recovery from external injury.

It also has a role in organelle trafficking, which refers to the movement of cell components from one part to another.

The elements of the cytoskeleton cannot be found in single standard, but consists of multiple strands of three major components. 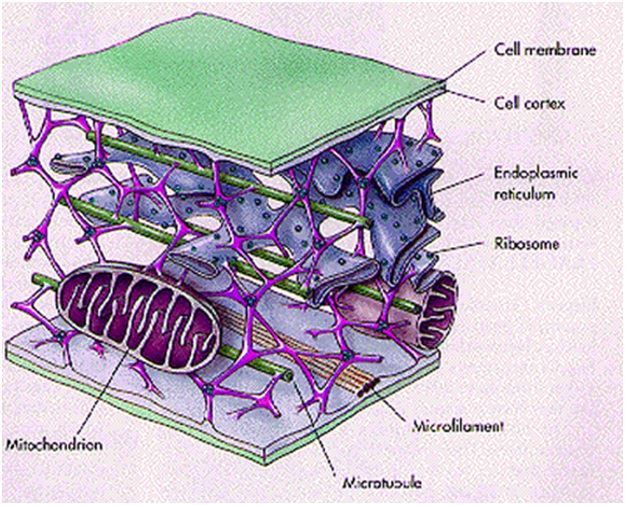 The three main components of cytoskeleton are: microtubules, intermediate filaments, and microfilaments.

Just like your bones are different in shapes, the three components of the cytoskeleton also have different size. The biggest in size are the microtubules. They appear like small (macro), hollow tubes (tubules), round and have a diameter of about 24 nanometers.

Microtubules are made up of tubulin, which is a protein. Thirteen tubulins link to form a single tube. Microtubules are very dynamic structures, which reveal that they can change quickly. They keep growing or shrinking steadily, just like a rope unraveling and raveling at one end. These microtubules support in transporting of cellular materials and divvying chromosomes during cell division.

Microfilaments are thread-like protein fibers, 3-6 nm in diameter. They consist of a contractile protein the most abundant cellular protein, called actin. Micro filaments relation with the protein myosin is responsible for protein contraction. These are also responsible for cellular movements including cytokinesis, contraction, and gliding.

The intermediate filaments are about 10 nm diameter and provide tensile strength to the cell.

To know more about Cytoskeleton and any other Biology concepts, please visit www.byjus.com