Hormones are chemicals that affect a lot of the bodily functions ranging from hunger, reproduction and growth to much more complicated functions like human emotions and behaviour. These hormones are produced in our body through nine primary glands and these glands, along with other organs that provide auxiliary functions make up the endocrine system.

Let us have a detailed look at the endocrine system notes and explore the major human endocrine glands. 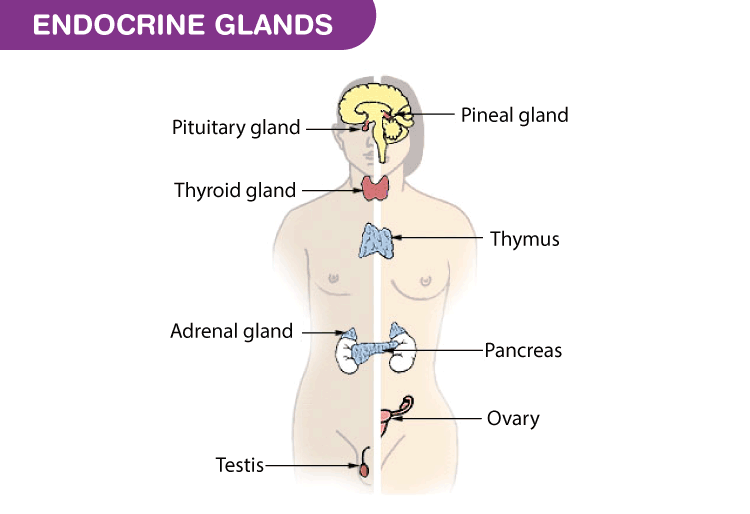 Unlike exocrine glands(sweat, salivary), endocrine glands secrete their respective substances directly into the bloodstream rather than through a duct. These endocrine glands belong to the body’s control system and they produce hormones which help to regulate the functions of cells and tissues. Some glands are specific to either male (testes) or female (ovaries).

Enclosed deep within the skull, the pituitary gland is the size of a pea. It hangs on a stalk at the base of the brain. It consists of an anterior portion that produces hormones and a posterior portion that has many neural links. This gland is regarded as the master gland as it controls the functions of all the other glands (such as the adrenal, thyroid glands) in the endocrine system. The pituitary gland stimulates the adrenal gland to secrete cortisol, a steroid hormone controls a range of activities from controlling the body’s metabolism to stimulating blood pressure. The pituitary gland also secretes prolactin, which stimulates the production of milk.

The thyroid glands can be found at the front of the neck. It sits low in the throat, between the windpipe. Brownish red, it has blood vessels coursing through it. It secretes hormones that are collectively called thyroid hormones. The most prominent are T3 and T4, which influence the body’s rate of metabolism.

The parathyroid glands consist of four small glands that are located behind the thyroids in the neck. They influence the calcium levels in the body by producing a hormone called Parathyroid Hormone. Sometimes, when the gland produces excess parathyroid hormones, it can have negative effects such as brittle bones and kidney stones.

The adrenal glands sit atop the kidneys and are no larger than a walnut. These glands produce over 150 hormones that regulate different functions in the body. The most well known is Adrenaline, which triggers the flight or fight response. In other words, this is a stress hormone that helps the organism to either face a dangerous situation or to avoid it altogether. It does this by:

The pancreas is exocrine as well as an endocrine gland that sits behind the stomach. It is roughly 6 inches long and rather flat. The pancreas has two primary roles to play:

The pineal gland is located between the two halves of the brain. It was also known as the “third eye” for most of history due to its location in the brain and its connection with light.

It produces a hormone known as melatonin which influences the body’s internal clock. Also known as the Circadian Rhythm, it influences the body’s sleep/wake cycle. Its effects are not really noticeable unless the individual is sleep-deprived. Factors such as jet lag, or working the night shift has a more noticeable effect on an individual because Circadian rhythm tends to coincide with the day and night cycle. That’s why individuals who work during the night find it hard to fall asleep during the day, and consequently stay awake for the next night. 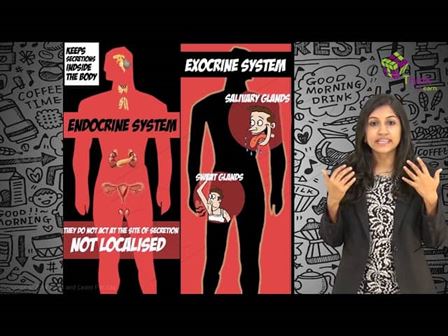 Where are the endocrine glands located?

The endocrine system is comprised of several glands. The human brain contains the hypothalamus, pituitary, and pineal glands. The neck includes the parathyroid and thyroid glands. The pancreas is beneath our stomach, the adrenals are on top of the kidneys, and the thymus is between our lungs. The pelvic area contains either male testes or female ovaries, depending upon gender.

What is the most important endocrine gland?

The pituitary gland, a tiny gland around the size of a pea, is essential for controlling important functions of the body and overall well-being. Because it manages the function of most other hormone-secreting glands, it is known as the “master gland” of the body.

Mention the functions of the gonads.

Steroid hormone synthesis and gametogenesis are the two primary functions of the gonads. In addition, reproductive hormones are essential for foetal growth, development, sexual maturation, and sexual differentiation.

Register at BYJU’S for endocrine system notes. Refer to these notes for reference.