Diabetes and its Symptoms

Diabetes is a metabolic disease or a condition in which the glucose levels in the blood will be high over a prolonged period of time. In other words, it can be defined as a condition that occurs when the body cannot efficiently make use of glucose that serves as a source of energy for body cells. Blood sugar levels are controlled by a hormone called insulin.

Diabetes is either caused due to the insufficient production of insulin by the pancreas or it may occur if the cells of the body are not effectively responding to the insulin produced.

Diabetes is categorized into the following types based on the reason for their cause:

It is the inability of the body to effectively use or respond to the insulin produced by the body, and as a result, blood sugar levels cannot be regulated effectively. Diabetes mellitus is further classified into two types, namely:

It is also known as Diabetes Mellitus Type 1. It occurs when the pancreas fails to produce sufficient insulin. The consequent lack of insulin causes an increase in glucose levels in urine and blood.

It is also called Diabetes Mellitus Type 2. The prime reason for the occurrence of type 2 diabetes is obesity and lack of exercise in people who are genetically biased.

When the body is unable to respond or produce the Antidiuretic hormone (ADH), which is secreted by the hypothalamus, Diabetes Insipidus occurs. This hormone helps the kidneys manage the amount of water in the human body. Without this essential hormone, the kidneys pass an abnormally large volume of urine that is insipid (meaning: odourless and dilute).

This condition occurs in pregnant women who develop high blood sugar levels without a previous history. The condition usually resolves after delivery.

Signs and Symptoms vary from person to person, or even there may be no signs sometimes. First, let us come up with common symptoms of diabetes. 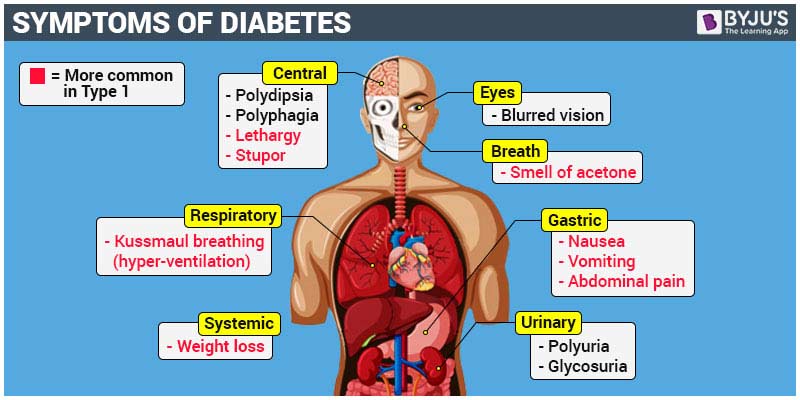 It is quite easily diagnosed. It is associated with common symptoms of diabetes as well. Other symptoms are stated below.

It is mainly associated with lifestyle factors. Genetics also adds up to the factor. Its symptoms usually go unnoticed. The gradual decrease in weight is one of the symptoms of type 2 diabetes. They may be a lack of physical activity, obesity, urbanization, and a change in diet.

Symptoms of Diabetes in Women

Some of the symptoms experienced by women are the same as men but there are some symptoms that are experienced only by women. They are stated below.

Type 1 and Type 2 Diabetes during Pregnancy

During pregnancy, ketones and blood glucose travel through the placenta to the baby. They require energy from glucose just as a mother requires. Babies are prone to several birth defects if the glucose level is too high.

About 9.2 per cent of gestational diabetes occurs during pregnancies. The hormones of pregnancy interfere with a working pattern of insulin, leading to more production of insulin and for some women, it isn’t enough insulin which in turn leads to Gestational Diabetes.

Stay tuned with BYJU’S to learn more about Diabetes and its symptoms.

Test your Knowledge on Diabetes
Q5

Visit BYJU'S for all Biology related queries and study materials