What is Diabetes insipidus? 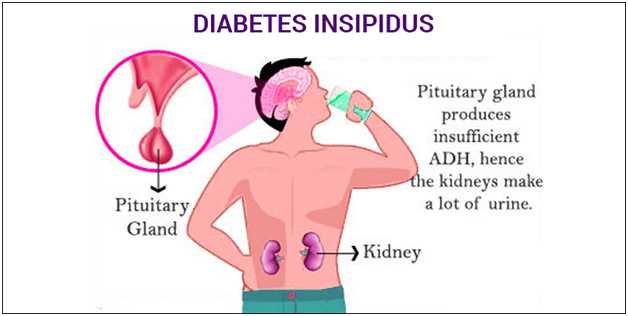 It is one of the rare disorders that occur when a person’s kidneys pass an abnormally more amount of urine which is insipid i.e, odourless and dilute. In other words, it is an abnormal situation wherein kidneys are no longer able to control the excretion of water.

There are four different types of diabetes insipidus:

This condition is caused by the damage to the pituitary gland or hypothalamus.

This condition is caused by different factors, kidney diseases, high levels of calcium, urinary tract blockage or low potassium levels in the body.

This condition is caused by the dysfunction of the thirst mechanism in the hypothalamus.

Our kidney functions by filtering the blood multiple times. Only a little amount of concentrated urine is released and most of the water is reabsorbed. Diabetes insipidus happens when the kidneys are not able to concentrate the urine appropriately due to which a lot of dilute urine is excreted.

Antidiuretic hormone (ADH) controls the amount of water that is excreted in the urine. ADH is also known as vasopressin. It is made in the part of the brain known as the hypothalamus. Then it is stored and secreted by the pituitary gland which lies just beneath the base of the brain.

To know more about diabetes insipidus or other related illnesses, visit BYJU’S.