Transportation is the process of movement or distribution of different materials or goods from one place to another. In general, we humans make use of different means of transportation. Similarly, the living system, including plants, animals, and humans has an amazing network of transportation systems, involved in circulating food, minerals, hormones, oxygen, carbon dioxide, waste products, etc.

There are two types of transportation in our body- Active and Passive Transport, which help in the transportation of biochemical nutrients like water and oxygen to the cells.

Passive transport is a natural phenomenon, which does not require any external energy.

Let us explore more about Passive transport, its types and other related examples.

What is Passive Transport?

Passive transport is the fundamental movement of ions and other molecular substances within the cells along the concentration gradient, without any external energy. It is also known as passive diffusion. 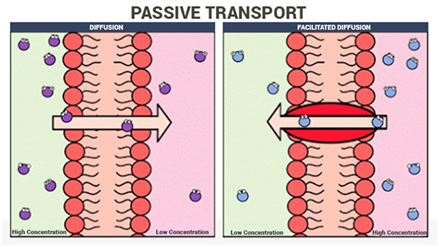 There are four types of passive transport:

Diffusion is the movement of substances from a region of higher concentration to a lower concentration.  The difference in the concentration of the two areas is termed a concentration gradient and the process of diffusion continues until this gradient neutralizes.  Diffusion occurs in liquids and gases because their particles move randomly from one place to another. It is an important process in living things required for different life processes. The substances move in and out of the cells by simple diffusion.

Facilitated diffusion is the passive transportation of ions or molecules across the cell membrane through specific transmembrane integral proteins. The molecules, which are large and insoluble require a carrier substance for their transportation through the plasma membrane. This process does not require any cellular or external energy.

Glucose transporter, ion channels and aquaporins are some examples of facilitated diffusion. The cell membrane is permeable only to a few molecules that are smaller in size and non-polar. Therefore, facilitated diffusion with the help of transmembrane proteins is important.

Filtration is the process of separating solids from liquids and gases. The selective absorption of nutrients in the body is an example of filtration. This process does not require any energy and takes place along the concentration gradient. The kidneys are an example of a biological filter. The blood is filtered by the glomerulus and the necessary molecules are reabsorbed.

In the process of filtration, the cell membrane permits only those substances which are soluble and could easily pass through its pores. 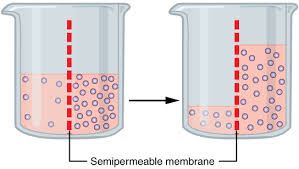 Passive transport represented by the process of osmosis

In the process of osmosis, water and other molecules pass through a selectively permeable membrane in order to balance the concentration of other substances.

There is a theory of conflict about the process of osmosis. Few biologists suggest that osmosis is an active transport and not passive transport.

Following are some examples of passive transport: