Sun is the ultimate source of energy for all life on earth. Plants use this energy to make food. This energy is transferred when the plants get consumed by other organisms, and eventually, this energy makes its way up the food chain.

Predation is the interaction between prey and a predator, where the energy flows from one organism to the other. The predator is the organism that feeds on other organisms called prey.

Read on to explore what are predators and their types in detail. 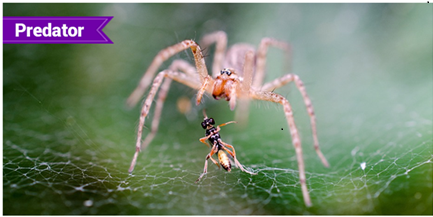 Predators can also fall prey to other large animals depending on where they fall in the food chain. E.g. a snake is a predator to a mouse, but prey to a hawk.

Predators can fall under the following categories:

Carnivorous predators kill and eat their prey. They include large animals such as the lion and tiger. Each carnivore has its own mode of feeding, from sea otters feeding on sea stars to blue whales feeding on zooplankton and small marine animals.

These include animals such as cows, buffaloes, goats, sheep, and deer, that consume plants and plant products.

These predators live in the body of the host and derive nutrients from its body for survival and reproduction. In this, the host suffers a loss of energy but is not always killed.

Predators adapt in the following ways in order to attack and catch their prey:

Following are some of the examples of predators:

Large predators have special adaptations to kill their prey. Polar bears, killer whales and great white sharks are some of the large predators found on earth.

The polar bear largely feeds on seals. The killer whales eat seals, sea lions, fish, etc. The great white sharks are the most dangerous ocean predator and feed on almost every organism.

Small predators do not cause mass destruction. E.g. sea stars feed largely on various types of shellfish. The ladybug is the smallest predator that feeds on aphids.

To know more about predators, their types and examples, keep visiting BYJU’S website.