“Gastrointestinal tract is the part of an organ system in humans and other animals that take in food, digest it, absorb nutrients and expel it out in the form of faeces.”

The gastrointestinal diagram given below represents the different parts of the tract that including the oral cavity, oesophagus, stomach, intestines and anus. 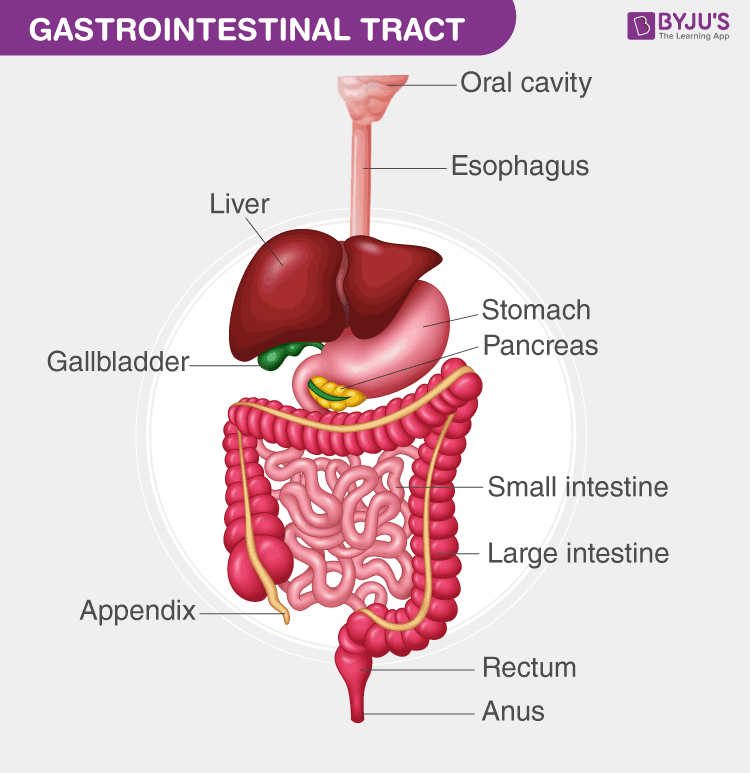 The gastrointestinal tract in humans begins at the mouth, continuing through the oesophagus, stomach, and small and large intestines. The GI tract is about 9 meters in length.

There are many supporting organs, such as the liver, which helps by secreting enzymes that are necessary for the digestion of food.

The human GI tract can be divided into two halves, namely:

The upper GI consists of the following organs:

It includes the teeth, tongue, and buccal mucous membranes containing the ends of the salivary glands that continue with the soft palate, floor of the mouth, and underside of the tongue. Mouth functions by chewing the food, constantly by the muscular action of the tongue, cheeks, and teeth through the lower jaw and upper jaw.

The pharynx is enclosed in the neck and functions as part of both the digestive system and the respiratory system. It protects the food from entering the trachea and lungs.

A muscular tube-like structure that functions by carrying food to the stomach. Once the chewed food reaches the oesophagus from the mouth, the action of swallowing becomes involuntary and is controlled by the oesophagus.

This is where most of the digestion takes place. The stomach is a J-shaped bag-like organ that stores the food temporarily, breaks it down, mixes and churns it with enzymes and other digestive fluids and finally, passes it along to the small intestine.

The lower GI consists of the following organs:

The large intestine, also known as the Colon, is a thick tubular organ wrapped around the small intestine. Its primary function is to process the waste products and absorb any remaining nutrients and water back into the system. The remaining waste is then sent to the rectum and discharged from the body as stool.

Gastrointestinal infection can be caused by viruses, bacteria and parasites that cause inflammation of the gastrointestinal tract and gastroenteritis. These might infect both the stomach and the small intestine.

The microorganisms that can cause these infections include adenovirus, campylobacter, E.coli, Staphylococcus aureus, etc.

Few of the gastrointestinal tract diseases include:

Constipation refers to infrequent or incomplete bowel movements. This is caused due to inadequate consumption of dietary fibre and water in the diet.

This is a condition in which the colon muscle contracts more often than in normal people. It causes bloating, abdominal pains and cramps, diarrhoea, etc.

Colon cancer begins in the large intestine and affects older people. It begins as small, non-cancerous clumps. These clumps gradually convert to cancer. It can be treated with surgery, chemotherapy, and radiation therapy.

These are swollen blood vessels that line the opening of the anus. They are caused by excess pressure due to the strenuous movement of the bowel.

For more information on the gastrointestinal tract, its definition, diseases and infections, keep visiting BYJU’S website or download BYJU’S app for further reference.