The process of breaking down of large food particles into smaller and water-soluble particles, which can be easily absorbed by the blood plasma is termed as digestion. All parts of the body are involved in the uptake and digestion of food along with the elimination of undigested material.

What is the Alimentary Canal?

The alimentary canal is mainly referred to as the pathway by which food enters our body and moves out through the anus after digestion. It is a tube-like structure which starts from the mouth and ends in the anus. The alimentary canal plays a primary role in the human digestion and is also termed as the digestive tract.

Organs of the Alimentary Canal

The main organs of the alimentary canal are:

The structure and functions of these organs are discussed below. 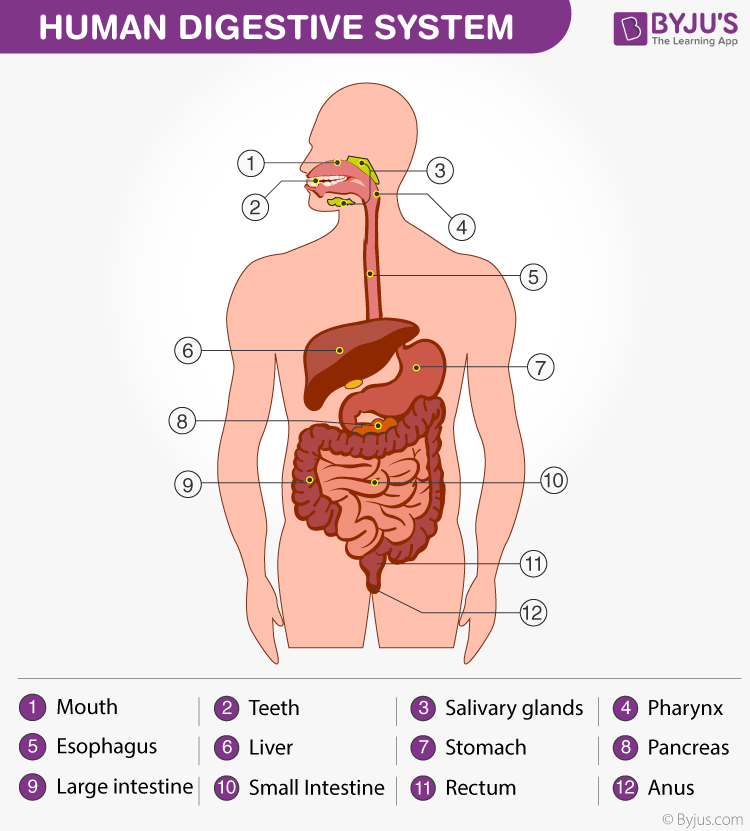 Let’s learn in detail about various parts of the human digestive system.

The mouth is the first part of our digestive system. Food is ingested through the mouth.

The oral cavity comprises the palate, tongue and teeth.

Palate –  The roof of the oral cavity.

Tongue – Muscular and glandular structure attached to the base of the oral cavity. The upper surface of the tongue has tiny projections known as lingual papillae. Lingual papillae are of three types: circumvallate, fungiform and filiform.

Humans are diphyodont i.e. they have two sets of teeth- milk or deciduous and permanent teeth. Here is the list of different types of teeth in humans with their functions.

The structure of the tooth is made up of three parts- the crown, neck, and root. The exposed part of the tooth is called the crown, the region where it is covered with gums is known as neck and root is embedded in the socket of the jaw bone (Thecodont).

It is the common passage for food and air. Epiglottis prevents the entry of food into the windpipe.

It is a muscular tube through which small bolus of food passes from the mouth to the stomach. The gastro-oesophageal sphincter controls the movement of food into the stomach.

It is a muscular bag, positioned at the upper left part of the abdominal cavity. It has four parts- cardiac, fundus, body and pyloric portion.

It is the longest part of the alimentary canal and comprises three parts- Duodenum, Jejunum, and Ileum.

The small intestine leads into the large intestine. It has three parts- Caecum, Colon, and Rectum.

To learn more about the Alimentary Canal and Human Digestive System, visit BYJU’S.