An Overview of Food Chain 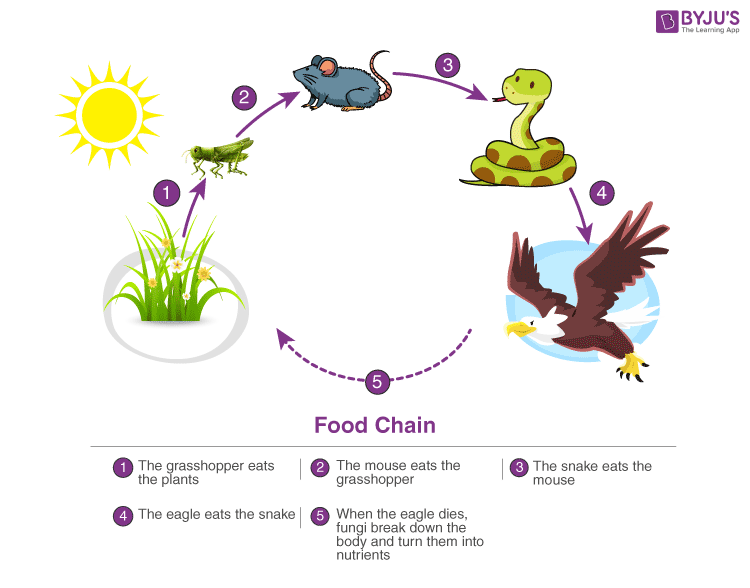 Now, let’s look at the other aspects of a food chain, to get a better understanding.

What is a Food Chain?

A food chain refers to the order of events in an ecosystem, where one living organism eats another organism, and later that organism is consumed by another larger organism. The flow of nutrients and energy from one organism to another at different trophic levels forms a food chain.

The food chain also explains the feeding pattern or relationship between living organisms. Trophic level refers to the sequential stages in a food chain, starting with producers at the bottom, followed by primary, secondary and tertiary consumers. Every level in a food chain is known as a trophic level.

Decomposers complete a life cycle. They help in recycling the nutrients as they provide nutrients to soil or oceans, that can be utilised by autotrophs or producers. Thus, starting a whole new food chain.

Several interconnected food chains form a food web. A food web is similar to a food chain but the food web is comparatively larger than a food chain. Occasionally, a single organism is consumed by many predators or it consumes several other organisms. Due to this, many trophic levels get interconnected. The food chain fails to showcase the flow of energy in the right way. But, the food web is able to show the proper representation of energy flow, as it displays the interactions between different organisms. 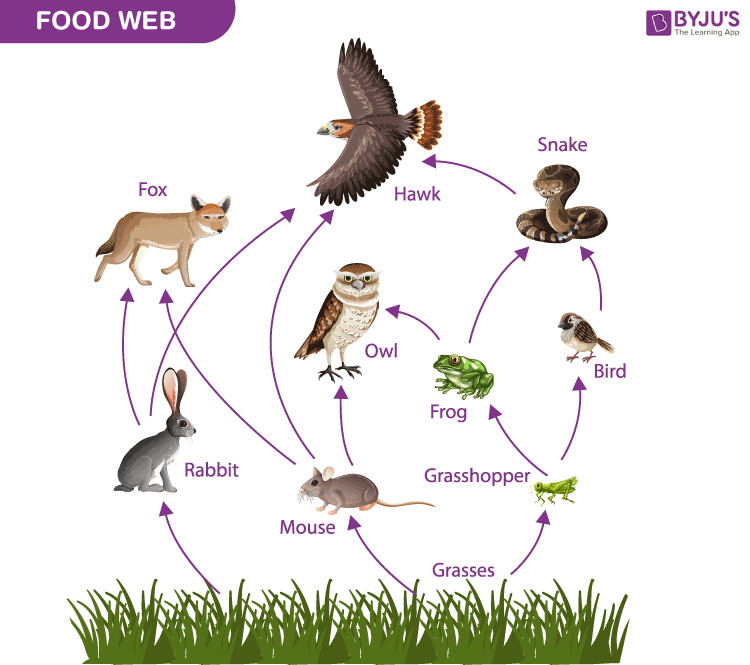 When there are more cross-interactions between different food chains, the food web gets more complex. This complexity in a food web leads to a more sustainable ecosystem.

There are two types of food chains, namely the detritus food chain and the grazing food chain. Let’s look at them more closely:

Understanding food chains is vital, as they explain the intimate relationships in an ecosystem. A food chain shows us how every living organism is dependent on other organisms for survival. The food chain explains the path of energy flow inside an ecosystem.

What are the first organisms in a food chain?

Producers, also known as autotrophs, comprise the first level in a food chain.

What is the difference between the food chain and the food web?

What role do humans play in a food chain?

The role of humans in the food chain varies, depending on what the human consumes as food. If humans consume only plants, they are known as primary consumers. If the human eats an organism that consumes plants, the human is known as a secondary consumer, and so on. So they are referred to as omnivores.

What are animals called in a food chain?

Animals are known as consumers in a food chain because they eat other plants and animals.

What do food chains end with?

A food chain begins with producers who make food, continues with consumers who eat the food and ends with the topmost predator.

To explore more information about food chains or other kinds of food chains, register with BYJU’S Biology.

Test your knowledge on Overview Of Food Chain
Q5