In an ecosystem, plants have the role of producers while animals have taken the role of consumers. Hence, their daily activities and functions vary, so do their cell structure. Cell structure and organelles vary in plants and animals, and they are primarily classified based on their function. The difference in their cell composition is the reason behind the difference between plants and animals, their structure and functions.

Each cell organelle has a particular function to perform. Some of the cell organelles are present in both plant cell and the animal cell, while others are unique to just one. Most of the earth’s higher organisms are eukaryotes, including all plant and animals. Hence, these cells share some similarities typically associated with eukaryotes.

For example, all eukaryotic cells consist of a nucleus, plasma membrane, cytoplasm,  peroxisomes, mitochondria, ribosomes and other cell organelles.

Diagram showing the Difference between Plant cell and Animal cell

The major differences between the plant cell and animal cell are mentioned below:

Both plant and animal cells comprise membrane-bound organelles, such as endoplasmic reticulum, mitochondria, the nucleus, Golgi apparatus, peroxisomes, lysosomes. They also have similar membranes, such as cytoskeletal elements and cytosol. The plant cell can also be larger than the animal cell. The normal range of the animal cell varies from about 10 – 30 micrometres and that of plant cell range between 10 – 100 micrometres.

Difference between the plant cell and animal cell is an important topic for Class 8 students and higher. Discover other important topics by visiting BYJU’S. 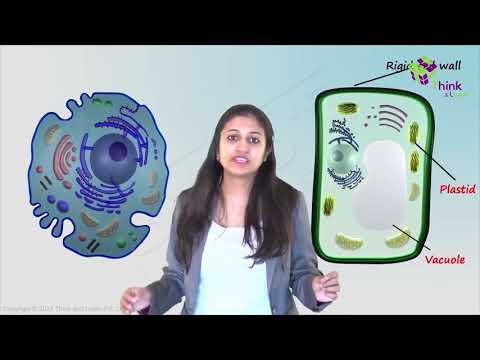 Which cell organelles are present only in plant cell and absent in animals cell?

Plant cells have a cell wall and plastids that animal cells lack.

How do plant cells and animal cells differ with respect to their shape?

A plant cell has a square or rectangular shape while the animal cells have an irregular or round shape.

Why are plant cells generally larger in size compared to the animal cells?

Plant cells comprise a large central vacuole that occupies a majority of the volume and makes the cell larger. This vacuole is usually absent in the animal cell.

What is the function of vacuoles in a plant cell?

The vacuole stores waste material in a plant cell. It also maintains proper pressure in a plant cell that helps in providing proper support and structure to the growing plants.

Animal cells comprise lysosomes and centrosomes that are completely absent in a plant cell.

The central vacuole provides structural support to the plant cell.

Name the cell organelle responsible for carrying out photosynthesis in plant cells.

Chloroplasts are responsible for carrying out photosynthesis in a plant cell.