Difference between Turtle and Tortoise

Difference between turtle and tortoises is easy to misunderstand because superficially, both these classes of animals look quite similar. 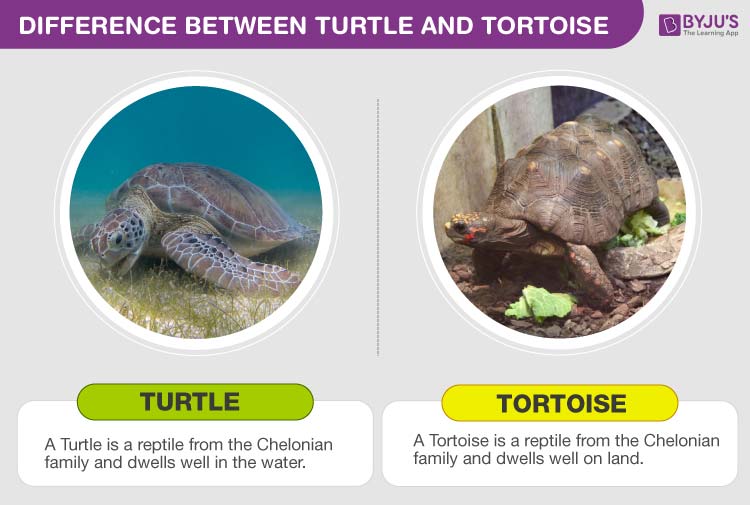 Though the major difference between turtle and tortoise is the habitat, not all turtles are aquatic. Some turtles even live most of their lives on dry land

Biologically, however, these organisms have various adaptations that clearly distinguish them from each other. One of the critical difference between a turtle and tortoise is the habitat. Most turtles are aquatic while tortoises are terrestrial reptiles.

The difference between tortoise and turtle is apparent when their habitat is taken into consideration. From a strictly biological perspective, all tortoises are terrestrial. Most turtles are aquatic or at least semi-aquatic. However, turtles and tortoise share a common ancestor, hence, their body plans share common physical characteristics. Both these classes of organisms fall under the order Testudines. This order encompasses all animals with four limbs (tetrapods) that have a protective shell on their body.

Explore more difference between turtles and tortoises only at BYJU’S. Alternatively, register at BYJU’S to discover other fascinating topics from KT-Extinction, cryptobiosis, suspended animation and more.

1. What is the difference between a turtle and a tortoise?

Turtle and tortoise essentially belong to the same family, however, turtles, in general, are adapted to an aquatic or at least semi-aquatic life while tortoises are predominantly terrestrial.

2. Are tortoises bigger than turtles?

Turtles are generally larger than tortoises. The largest turtle is the leatherback turtle. It can weight anywhere 300 to 700 kilos. The largest tortoise is the Aldabra giant tortoise, with adult males weighing an average of 250 kilos.

3. What do tortoises and turtles eat?

Tortoises are herbivorous and they subsist on grasses and leafy vegetables. Turtles, on the other hand, are omnivores. They have been observed to eat jellyfish, urchins, molluscs and seaweed.

4. What is the lifespan of a turtle?

5. What is the lifespan of a tortoise?

The lifespan of tortoises are usually longer than that of turtles. However, it strictly depends upon the species. An Aldabra giant tortoise was found to be over 225 years old.

6. Provide a few examples of tortoises.