“Species are often defined as a group of individuals with similar characteristics, where they can interbreed to produce fertile offsprings.“

To differentiate between different types of living organisms, species is used as the principal natural unit in biology. 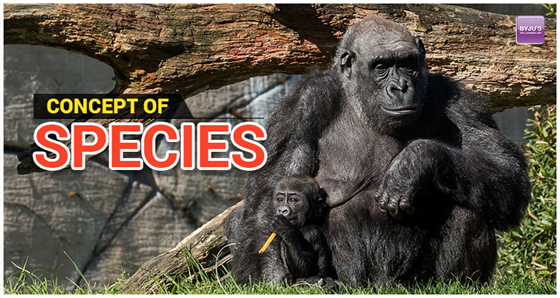 Four most important concepts of species are:

In this concept, there is a finite number of varieties of living organisms that exist on earth. These types do not exhibit any relationship with each other. Such varieties are termed as species. This inequality is regarded as an unimportant and irrelevant phenomenon.

Aristotle and Plato stated this concept in their philosophies. In the year of 1954 and 1956, Cain regarded the Typological species concept as the morphospecies concept. As the members of the species or a taxon can be identified by their essential characteristics, a group of scientists refer to this as essentialist species concept.

The nominalistic species concept is the concept of Occam and his followers, of the belief that nature only produces individuals. Species are the creation of man. In nature, they lack definite exis­tence. These concepts do not have any scientific basis.

It believes that the species have been inven­ted to be referred to big numbers of individuals jointly. During the 18th century in France, this concept was in demand and even now is used by some botanists.

In the middle of the 18th century, a fresh concept called the biological species concept appeared. This concept was acknowledged in the later half of the nineteenth-century once Darwin’s “Origin of Species” was published (in 1859). This is also known as Newer Species concept.

K. Jordan was the first to formulate this concept in 1905. Later in 1940, Mayr supported this concept. As per this concept, “a species is a group of interbreeding natu­ral population that is reproductively iso­lated from other such groups”. Mayr described that the members of a species exhibit these attributes:

Following are the different types of species:

It includes a group of morphologically similar organisms.

The population is obtained from a single parent.

It includes the population that involves sexually reproducing individuals.

It is a combination of sexually reproducing organisms, phyletic lineages and uniparental organisms.

Login to BYJU’S to learn more about the concept of species, the biological species concept and the types of species.

What is a species?

Species is defined as the group of living organisms that can interbreed to produce fertile offspring.

What is a genetic species concept?

The genetic species concept states that all the organisms are capable of inheriting traits from each other through a common gene pool.

How is biodiversity divided?

What is the phylogenetic species concept?

Phylogenetic species concept states that a few organisms have descended from a common ancestor and possess a combination of certain derived traits.

Who proposed the concept of species?

The concept of species was proposed by a zoologist Mayr in the year 1942.