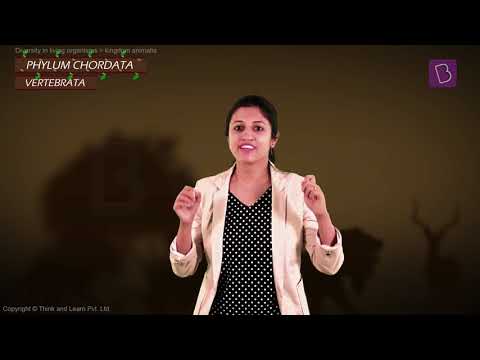 Phylum Chordata belongs to the Kingdom Animalia and includes all the vertebrates, i.e., animals with a backbone, and several invertebrates, i.e., organisms without a backbone. They possess a bilaterally symmetrical body and are divided into three different sub-phyla. 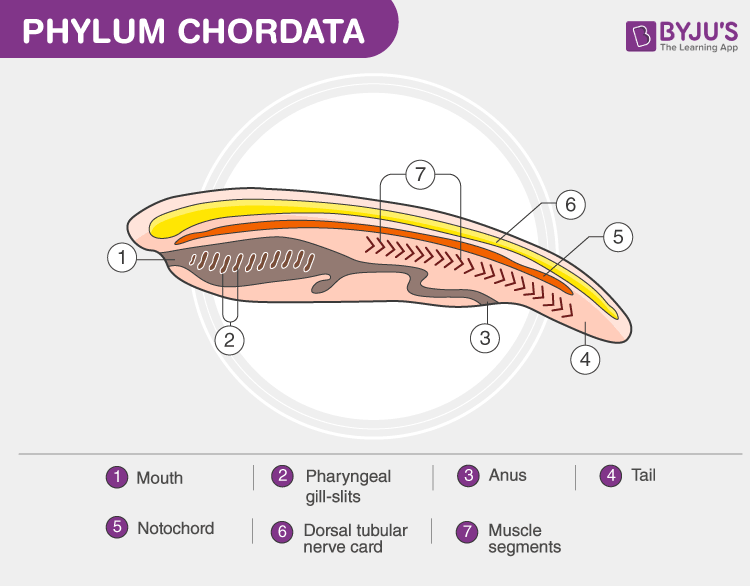 Let us have a detailed look at the characteristics and classification of the phylum Chordata.

It is a bundle of nerves running along the “back” and splits into the brain and the spinal cord. It is hollow and lies dorsal to the notochord.

They are the openings which allow the entry of water through the mouth without entering the digestive system viz. they connect mouth and throat. All Chordates have these openings on the lateral sides of the pharynx at some stage of their life.

It is an extension of the body to the anus. In chordates, the tail is composed of skeletal muscles which help in locomotion in fish-like species. It is absent in most of the adult Chordates.

Other characteristics of chordates include:

The subphylum Urochordata and Cephalochordata are collectively known as protochordates, which are marine animals. They are invertebrates but they share attributes of chordates.

For e.g., Lancelets possess the notochord and nerve cord throughout their life. However, they lack the brain and bony vertebral column like Branchiostoma.

The characteristic features of vertebrates include:

Subphylum Vertebrata is further classified into seven classes. They are:

Examples of phylum Chordata include the following:

This chordate belongs to the sub-phylum Vertebrata. It is a fish devoid of jaws and spends its larval stages as a filter-feeder. It gets transformed into a parasite as it grows into an adult.

It is a Urochordate with a barrel-shaped body attached to the substratum. The larva is tadpole-like and possesses a notochord. They bear a dorsal nerve, pharyngeal slits and a post-anal tail.

Learn more in detail about the phylum Chordata, its characteristics, classification and other related topics at BYJU’S Biology.