Arthropoda is the largest phylum with about nine lakh species. They may be aquatic, terrestrial or even parasitic. They have jointed appendages and a chitinous exoskeleton.

This phylum includes several large classes and contains the class Insecta which itself represents a major portion of the animal species in the world. They possess the ability to survive in every habitat. 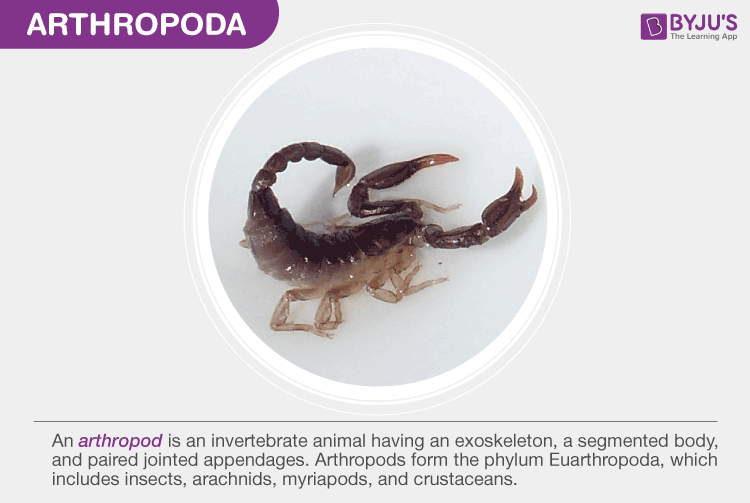 The arthropoda characteristics are mentioned below:

The classification of phylum arthropoda are as follows:

The subphylum Crustacea is divided into six classes-

The subphylum Myriapoda is divided into the following classes:

The subphylum Hexapoda is divided into two classes:

The subphylum Chelicerata is divided into the following classes:

The subphylum had only one class- Trilobita

Why is the name arthropods given?

What are the important characteristics of arthropoda?

The important characteristics of arthropoda include:

Which animals fall under the phylum arthropoda?

How did the arthropods evolve?

It is believed that the arthropods evolved from the same root as the annelids. The three lineages of arthropods are believed to have evolved independently from a common ancestor.

How did the arthropods adapt to land?

The early arthropods evolved adaptations such as tracheae for breathing. They also developed exoskeleton that prevents the skin of the animals from drying and provides support in case of buoyant water.

When did the first arthropods evolve?

Why is arthropoda the largest phylum?

Phylum arthropoda includes 80% species of animals. These species evolved certain adaptive features over the years to survive the changing climatic conditions and form the largest phylum in the animal kingdom.

The coconut crab, Birgus latro, is the largest arthropod on land. It is also a crustacean.