Protists are simple eukaryotic organisms that are neither plants nor animals or fungi. Protists are unicellular in nature but can also be found as a colony of cells. Most protists live in water, damp terrestrial environments or even as parasites. 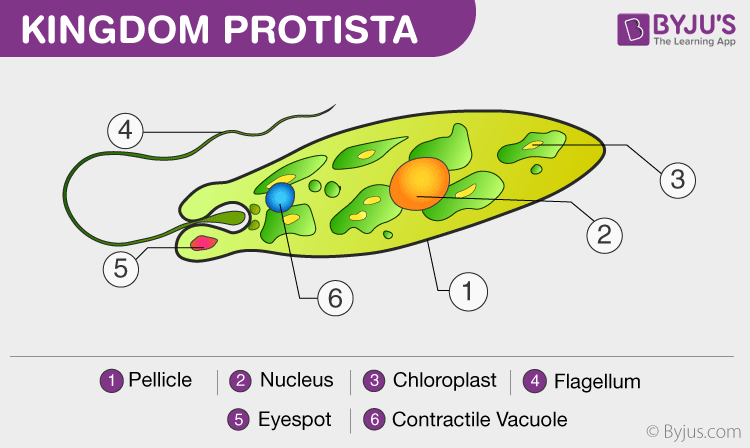 The term ‘Protista’ is derived from the Greek word “protistos”, meaning “the very first“.  These organisms are usually unicellular and the cell of these organisms contains a nucleus which is bound to the organelles. Some of them even possess structures that aid locomotion like flagella or cilia.

Scientists speculate that protists form a link between plants, animals and fungi as these three kingdoms diverged from a common protist-like ancestor, billions of years ago. Though this “protists-like” ancestor is a hypothetical organism, we can trace some genes found in modern animals and plants to these ancient organisms.

Therefore, these organisms are traditionally considered as the first eukaryotic forms of life and a predecessor to plant, animals and fungi.

The primary feature of all protists is that they are eukaryotic organisms. This means that they have a membrane-enclosed nucleus. Other characteristic features of Kingdom Protista are as follows:

Kingdom Protista is classified into the following:

Protozoans are unicellular organisms. Historically, protozoans were called “animal” protists as they are heterotrophic and showed animal-like behaviours.

There are also parasitic protozoans which live in the cells of larger organisms. Most of the members do not have a predefined shape. For instance, an amoeba can change its shape indefinitely but a paramecium has a definite slipper-like shape. The most well-known examples of protozoans are amoeba, paramecium, euglena. Unlike other members of this group, euglena is a free-living protozoan that has chlorophyll, which means it can make its own food.

The protozoans can be divided into four major groups:

Slime moulds are saprophytic organisms (they feed on the dead and decaying matter). These are tiny organisms that have many nuclei.

Usually, Slime moulds are characterized by the presence of aggregates called plasmodium and are even visible to the naked eye.

These form another category under kingdom Protista. These are generally single-celled or multicellular organisms. These are photosynthetic, found mostly in freshwater sources or marine lakes. They are characterized by a stiff cell wall.

Example of chrysophytes include diatoms and golden algae. They are characterised by the presence of a hard siliceous cell wall. Diatomaceous earth is formed due to the accumulation of cell wall deposits. They are photosynthetic organisms.

Dinoflagellates are photosynthetic and found in various different colours, according to the pigment present in them. They show bioluminescence and known to cause red tide.

Euglenoids are the link between plants and animals. They lack a cell wall but perform photosynthesis. In the absence of sunlight, they act as a heterotroph and feed on small organisms. The outer body covering is a protein-rich layer known as a pellicle. E.g. Euglena, Trachelomonas, etc.

Topics That May Interest You:

For more detailed information on kingdom Protista, or any other related topics, please explore BYJU’S Biology.

Protists include a vast collection of single-celled and multicellular organisms that have a nucleus. They also possess highly specialized cellular machinery called cell organelles that aid in performing various life processes. Most protists are free-living autotrophs (such as algae) while others are heterotrophic (Amoeba) or even parasitic (Trypanosoma protozoa).

State a few examples of Protists.

How are Protists classified?

Protists are broadly classified into 5 subdivisions based on their general characteristic features. They are classified as:

Outline the characteristics of Kingdom Protista.

Are all Protists unicellular?

No, not all Protists are unicellular. Protists such as moulds and algae are multicellular, i.e., they are made up of more than one cell. Amoeba, paramecium and euglena are unicellular organisms belonging to kingdom Protista.

Test your knowledge on Protista
Q5