Fish is an aquatic organism which belongs to the superclass Pisces. In the taxonomic hierarchy, fishes belong to the kingdom Animalia, phylum Chordata. They are in diverse groups which include armoured fish, cartilaginous fish, lobe-finned fish and ray-finned fish and so on. Among these, most of them are ectothermic i.e. cold-blooded organisms. According to the behaviour and characteristics of nature, they show diversity in their bodily structures. Most fishes have a strong and firm skeletal system.

General features of fishes include fins, streamlines and scales and tails. But differences are highlighted under their skins. Hence classification is much easier based on the skeletal system. A variety of fishes is found in aquatic habitats Some of these fishes are cartilaginous fishes (Chondrichthyes) whereas others are bony fishes (Osteichthyes). The skeletal system of fishes is either composed of thin and flexible cartilage or hard calcified bones or both. They are good swimmers and their body structures are designed accordingly. 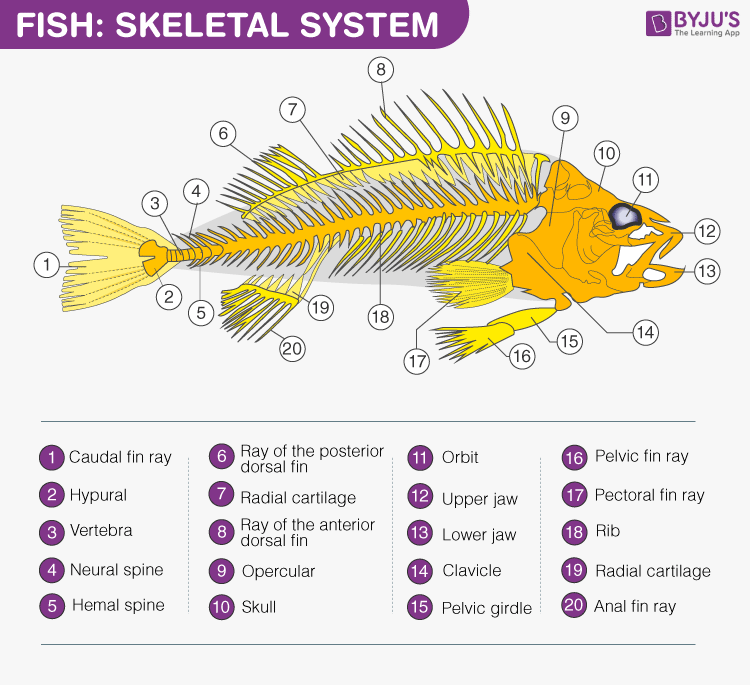 The skeleton of fish is either made of Bone or Cartilage. There are two different skeletal types:

The main features of the fish skeletal system are it consists of the vertebral column, jaw, ribs, cranium and intramuscular bones. It provides protection and control and also produces red blood cells along with the kidneys and spleen. Starting from the head, bony fish consist of solid hard bones called cranium. The cranium protects the brain from mechanical stresses. Osteichthyes have hinged jaws which aid them in feeding. But fishes like hagfish and lampreys are jawless fishes. Swim bladders help them in maintaining depth in water. Otoliths are unique characteristics of ear plates of bony fish which helps in steadiness.

Gills are a pair of respiratory organs which present on each side of a fish and also some amphibians. These organs help organisms to absorb dissolved oxygen in the water and therefore help the fish in the respiration process. There are three pairs of bones that aid gills. These pairs of bones are called gill arches, which are made of bony filaments. Fins are a vital part of fish. They help with propulsion, steering, and stability. Paired fins take up the role of steering while caudal fins and dorsal fins help in propulsion and stability respectively.

For more details on the skeletal system of fish and other species, visit BYJU’S. 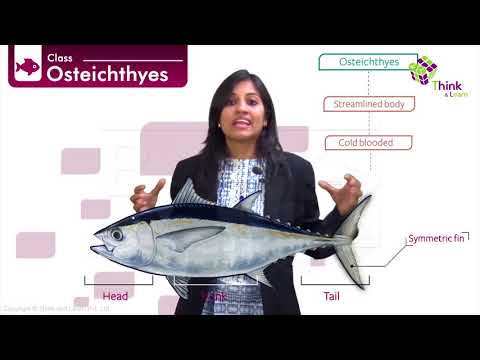