Ever since the dawn of mankind, diseases have plagued humans over the ages. Years of innovations and advancements in science has provided us with a deeper understanding of how diseases work. This has led to lower mortality rates and longer lifespans. But there are some diseases that just cannot be cured using traditional medicine or surgery. Gene therapy is an experimental technique that caters to patients with such diseases.

What is Gene therapy?

Gene therapy is a technique which involves the replacement of defective genes with healthy ones in order to treat genetic disorders. It is an artificial method that introduces DNA into the cells of the human body. The first gene therapy was successfully accomplished in the year 1989.

The simple process of gene therapy is shown in the figure below: 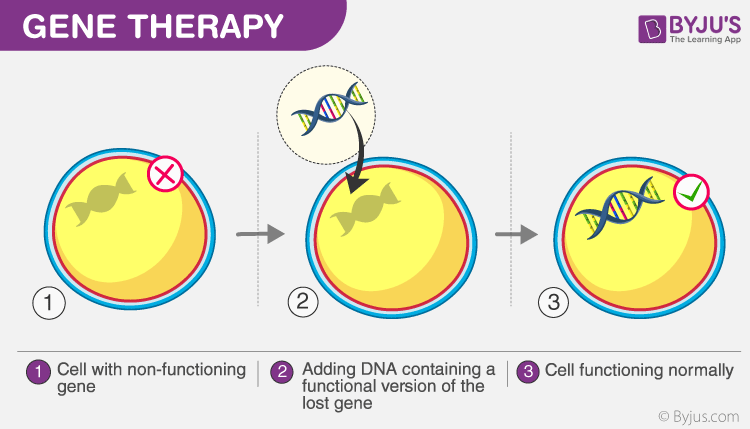 In the figure, the cell with the defective gene is injected with a normal gene which helps in the normal functioning of the cell. This technique is employed mainly to fight against the diseases in the human body and also to treat genetic disorders. The damaged proteins are replaced in the cell by the insertion of DNA into that cell. Generally, improper protein production in the cell leads to diseases. These diseases are treated using a gene therapy technique. For example, cancer cells contain faulty cells which are different from the normal cells and have defective proteins. Hence, if these proteins are not replaced, this disease would prove to be fatal.

Basically, there are two types of gene therapy

It occurs in the germline cells of the human body. Generally, this method is adopted to treat the genetic, disease causing-variations of genes which are passed from the parents to their children. The process involves introducing a healthy DNA into the cells responsible for producing reproductive cells, eggs or sperms. Germline gene therapy is not legal in many places as the risks outweigh the rewards.

For more information about gene therapy, login to BYJU’S.