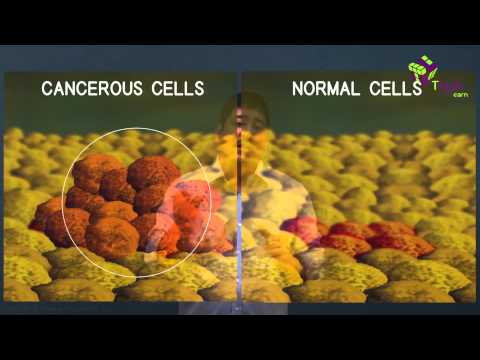 Cancer is one of the most feared diseases in the world and it affects over 11 lakh people every year in India alone. Worldwide, more than 10 million people succumb to this disease every year. Let us explore what is cancer, the causes of cancer, symptoms, diagnosis, and treatment of cancer.

In humans, cell differentiation and proliferation are highly manipulated and regularized by the cell division mechanism. Uncontrolled cell-division occurs when a process called contact inhibition fails. In healthy organisms, during this process, when cells come in contact with other cells, the process of cell replication ceases.

As a result, contact inhibition becomes a powerful anti-cancer mechanism, but it is lost in cancer cells. Hence, most types of cancer have tumours (except for cancers of the blood).

It is often presumed that all tumours are cancerous – but this is a misconception. A tumour becomes cancerous only when it spreads to other parts of the body

A tumour is classified into one of these three types based on its ability to undergo metastasis (spreading):

These tumours are localized at a particular location in the body. Moreover, it does not spread to the other parts of the body and is generally harmless. However, when a benign tumour occurs in areas such as the brain, they can turn fatal. Treatment often involves surgery and it does not grow back.

These tumours are cancerous – meaning that it will grow quickly and spread to other normal tissues of the body. This ability to spread is called metastasis. Usually, cancer cells metastasize when it gets into the bloodstream or the lymph nodes and form secondary tumours across various sites in the body.

The most common form of cancer, it originates from the epithelial cells

Originates from the connective tissues such as cartilage, fat and bone tissues.

Originates from melanocytes, which are a type of cell that contains pigments.

Many factors are attributed to causing cancer. The most probable factors include:

The above factors are called carcinogens.

The detection and diagnosis of cancer are very important before it spreads to other parts of the body. Identification of cancer genes is pivotal to prevent cancer.

The following methods are used to detect cancer –

Commonly, three types of treatment are available for cancer.

Many chemical drugs have side effects in cancer patients like hair loss. So, interferons are injected into cancer patients to develop immunity against these side-effects.

To learn more about cancer and its side effects, visit BYJU’S.