Cancer is a serious disease in which the cells start dividing abnormally in an uncontrolled manner.

Most cancer cells are found in the shape of tumours, with a few notable exceptions such as leukaemia. All tumours are not cancerous. Some tumours, such as moles, stop growing and are not malignant.

Let us have a detailed look at the different types of cancer. 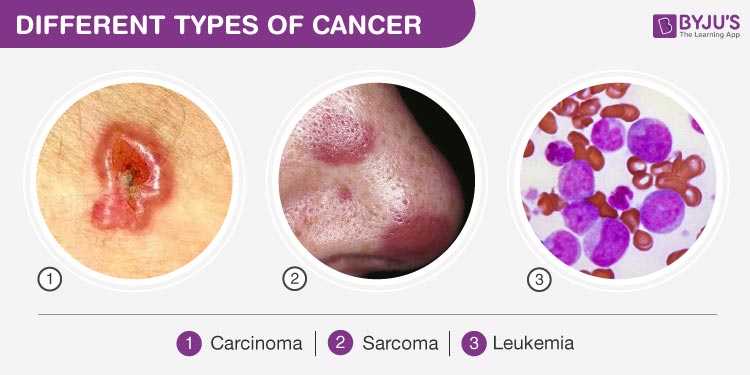 It is the most common form of cancer that affects the epithelial cells which form the lining of internal organs or the skin.

Lung cancer, skin cancer, pancreatic cancer and ovarian cancer are some of its common manifestations. Carcinomas can be identified by the different cells that they affect:

These cancer cells develop in the bones and soft tissues such as fat tissues, cartilages, blood vessels, lymph and other supporting tissues of tendons and ligaments.

The most common form of sarcoma in the bone is osteosarcoma, and in soft tissues include Kaposi sarcoma, liposarcoma, malignant fibrous histiocytoma, leiomyosarcoma, and dermatofibrosarcoma protuberans.

Lymphoma is a form of cancer that affects the lymphocytes in the lymph nodes, which are a part of the immune system. There are two kinds of lymphoma:

It is a form of skin cancer that targets melanin – the pigment responsible for skin colour. In this form of cancer, the melanocytes are affected resulting in the abnormal formation of melanin. It may also affect other tissues that are pigmented, such as the eyes.

Cancer can be identified by a variety of symptoms. In some cases, symptoms could vary or may not show any signs and symptoms. There are few general symptoms:

Apart from these, women should watch out for certain symptoms for the cancers that are unique to them:

Like symptoms, there is no conclusive evidence for its causes. However, scientists have found out certain things which aggravate the occurrence of this disease. Some of the common factors are:

Medical science has advanced greatly in the last few decades and found out the treatment for most forms of cancers. The process of treatment depends on the type and stages of cancer. Some of the common treatment includes surgery, chemotherapy, hormonal therapy, immunotherapy, and radiation therapy.

Test your knowledge on Types Of Cancer
Q5