DNA is the main hereditary material, but some contain RNA too, e.g. retrovirus. RNA mostly plays the role of a messenger in higher organisms. Though both are nucleic acids, why is there a difference in functions?  Scientists elucidate that, this is due to the difference between the chemical structure of DNA and RNA. For a molecule to be considered as genetic material, it must accomplish certain properties. They are as follows:

The difference between DNA and RNA explains the reason why DNA serves as the genetic material instead of RNA. By comparing DNA and RNA, it is evident that both the nucleic acids are able to replicate. Stability is an important criterion for continuity. DNA fulfils this criterion. This point was proved in Griffith’s experiment. The heat-killed S strain bacteria retained their virulent property when appropriate conditions were provided. In the case of RNA, 2‘-OH group present in them make them more reactive. Hence, DNA is proved to be less reactive chemically and more stable structurally than RNA. Thymine makes DNA more stable than RNA, where it is substituted by uracil. 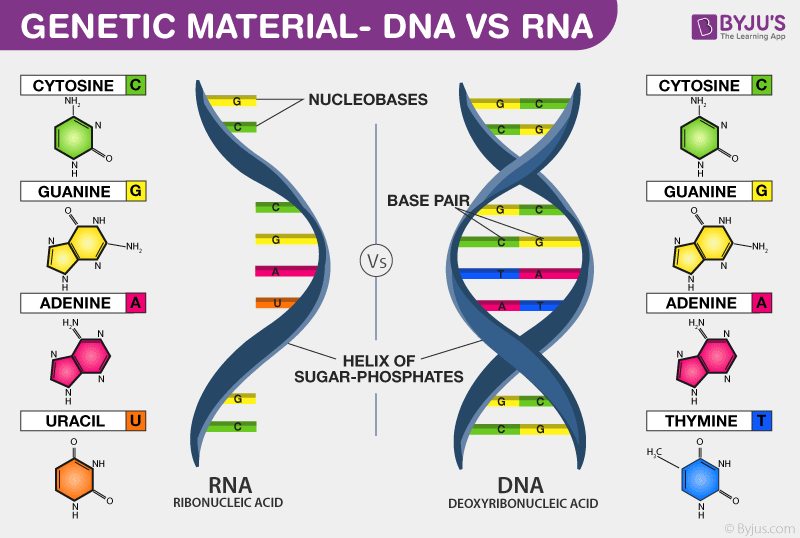 The unstable nature of RNA makes it more vulnerable to mutation. This property help virus with RNA as the genetic material evolves at a faster rate. At last, coming to the expression of Mendelian characters, RNA is much faster than DNA. That is RNA can independently code for protein synthesis while DNA coding for protein synthesis is mediated by RNA. RNA acts as a messenger for DNA in the process of protein synthesis.

Though both the nucleic acids can act as genetic material, DNA is much more preferred. DNA is stable both chemically and structurally which make it well-built genetic material. RNA in humans does not act as a genetic material but play various other roles such as an adapter, enzyme, helps in protein synthesis, etc. RNA functions as a messenger for information to be transferred.

Test your Knowledge on DNA and RNA!
Q5