“Glycolysis is the metabolic process that converts glucose into pyruvic acid.”

Glycolysis is the process in which glucose is broken down to produce energy. It produces two molecules of pyruvate, ATP, NADH and water. The process takes place in the cytoplasm of a cell and does not require oxygen. It occurs in both aerobic and anaerobic organisms. 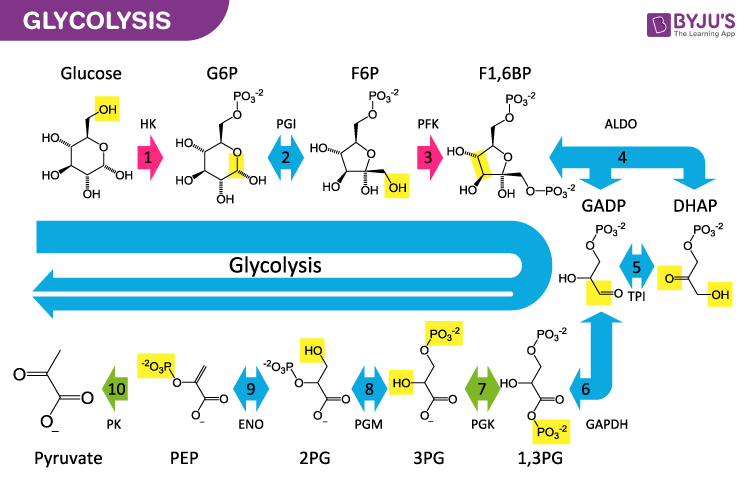 This metabolic pathway was discovered by three German biochemists- Gustav Embden, Otto Meyerhof, and Jakub Karol Parnas in the early 19th century and is known as the EMP pathway (Embden–Meyerhof–Parnas).

The glycolysis pathway occurs in the following stages:

The other ATP molecule transfers a phosphate group to fructose 6-phosphate and converts it into fructose 1,6-bisphosphate by the action of the enzyme phosphofructokinase.

The enzyme aldolase converts fructose 1,6-bisphosphate into glyceraldehyde 3-phosphate and dihydroxyacetone phosphate, which are isomers of each other.

Triose-phosphate isomerase converts dihydroxyacetone phosphate into glyceraldehyde 3-phosphate which is the substrate in the successive step of glycolysis.

The enzyme enolase removes a water molecule from 2-phosphoglycerate to form phosphoenolpyruvate.

To know more about glycolysis, its definition and the glycolysis pathway, keep visiting BYJU’S website.

Test your Knowledge on Glycolysis
Q5