From filling the honeycombs with sweet honey to stinging us if we dare take them, honeybees have always amazed us with their ability to create the best food substance – honey. They belong to the insect order Hymenopterans, which comprises the majority of the insects. Amongst the insect order, bees are considered to be social insects as they live in colonies. Bees are paramount for agriculture as they facilitate pollination, in fact, ⅓ of the world’s food supply pollinated by the bees. 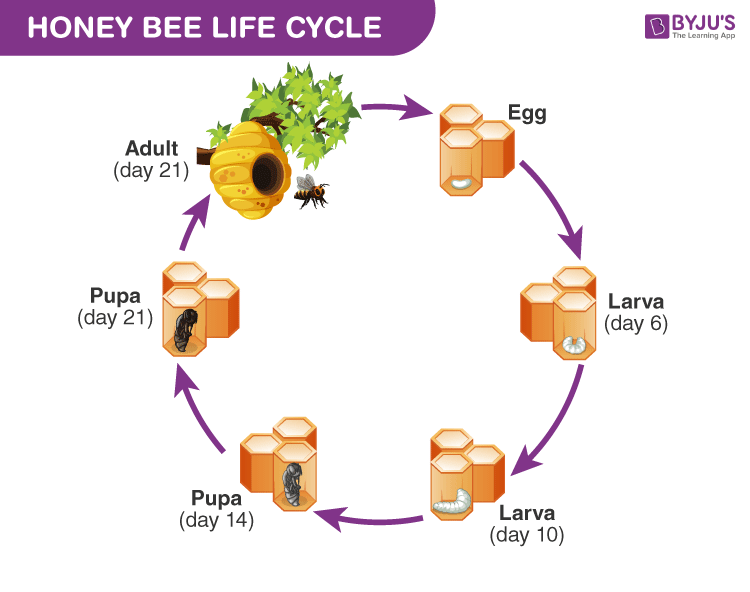 The scientific name of honey bees is ‘Apis’, which is Latin for ‘Bees’. Most of the European honey bees fall under Apis Mellifera; with ‘Mellifera’ being the Latin word for “honey-bearing”. The process of managing and breeding honey bees for acquiring honey and beeswax is known as apiculture or beekeeping. Apiculture is an old tradition that started with hunters in the forest in search of sweet honey.

The life cycle of honey bees is divided into four stages: the egg, the larval, the pupal and the adult stage.

The difference between a worker and the queen bee is made three days after the egg transforms into larvae and six days after the egg is laid in the beehive. The “royal jelly” is fed to all the larvae, i.e., the female bees, the workers and the drone bees during their initial three days as larvae. The larva sheds skin multiple times throughout this stage. Later, the royal jelly is fed only to the female larvae, which eventually becomes a queen bee. Finally, the worker bees cover the top of the cell with beeswax to protect and facilitate the transformation of the larvae into a pupa.

Here the bee has developed parts like wings, eyes, legs and small body hair that physically appears close to an adult bee.

Once the pupa is matured, the new adult bee chews its way out of the closed-cell. The queen bee takes 16 days from the egg stage to form into an adult. The worker bee takes 18 to 22 days for complete development, and drone bees take 24 days to develop into an adult bee.

How many honey bees can live in a beehive?

How is the beehive constructed by the bees?

The young worker bees make the beeswax to make the beehive. The beeswax is made through eight paired glands in the abdomen region of the bee. These glands secrete liquid wax which turns hard when exposed to air. The bees keep the wax in their mouths in order to maintain the working condition of the wax which constructs the honeycomb.

What is the amount of honey a beehive can produce in a lifetime?

On average, the honeycomb is capable of producing 50 to 60,000 pounds of honey. Out of which the honey bee requires only 25 per cent of honey and the remaining honey can be utilized by the beekeeper for harvesting.

What is bee bread?

Bees produce food substances for worker bees and larvae in the form of bee bread. When the bee is out there collecting nectar, she also collects some amount of pollen and stores it in her hind legs also known as “pollen baskets”. This accumulation of pollen is brought to the beehive and mixed with the nectar to create the bee bread. Bee bread is stored in beehives and provides proteins for the honey bees.

What is known as the Colony Collapse Disorder?

During 2006, the beekeepers began to notice the disappearance of large bee colonies and this abrupt disappearance of large colonies of bees was called Colony Collapse Disorder (CCD). There are several possible reasons for this disorder like climate change, genetically modified crops, usage of pesticides and even electromagnetic radiation from mobile phones.

To explore more information on honey bees and apiculture, register by BYJU’S Biology.