Some bacteria produce lactic acid from pyruvic acid. This metabolic process is also seen in the muscle cells of animals. There can be inadequate oxygen supply for respiration in muscle cells during physical exercise. Thus, in anaerobic conditions, pyruvic acid is reduced to lactic acid. This happens in the presence of the enzyme lactate dehydrogenase. Also, a reducing agent like NADH+H+ is reoxidised to NAD+.

It is a fermentation process where much of the energy is not released. Here, less than seven per cent of the glucose energy is released. Also, not all of it is trapped as high energy bonds of ATP.

In yeast, there is incomplete oxidation of glucose that happens in an anaerobic environment. Here, pyruvic acid is converted into carbon dioxide and ethanol. Some bacteria produce lactic acid from pyruvic acid by means of lactic acid fermentation. 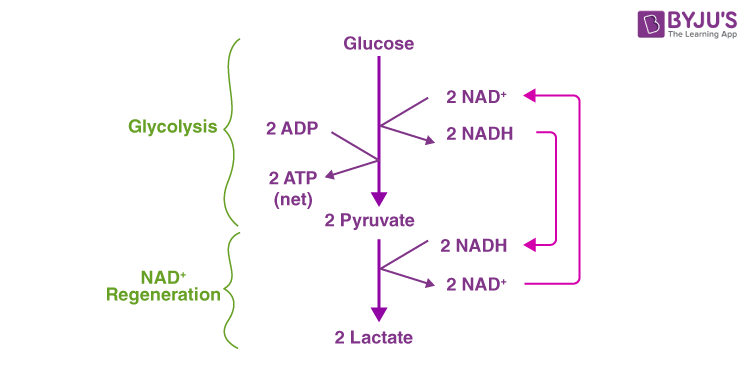 Lactic acid fermentation is the best method used for food preservation. Lactobacillus is the most commercially used bacteria for this process. They are used in the production of pickles, sour beer, fermented fish, yoghurt, etc.

What are facultative and obligate anaerobes?

Why do muscle cramps happen?