Measles is also known as rubeola or red measles. It is a highly contagious respiratory infection caused by a virus which causes rashes all over the body.

Measles could be spread through infected mucus and saliva. As per the World Health Organisation (WHO), 139300 deaths were recognized in 2010 as a result of measles. Out of 13,9300 global deaths, a majority of them were children below 5 years of age. Measles generally affects children who are not vaccinated. 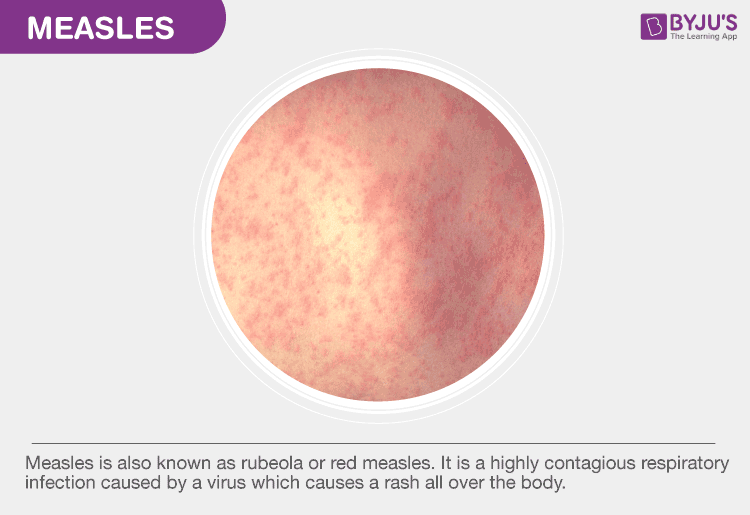 As discussed earlier, measles is caused by a virus. It is a contagious disease that spreads through mucus and saliva. When the measles infected person sneezes or coughs, the virus is released into the air. Measles virus could travel through the air. So anyone in that proximity might be infected by that virus.

Symptoms generally appear within 14 days of exposure to the virus. General symptoms of measles are body rash but before that, there are a few more symptoms which could help in detecting measles.

The symptoms of measles include:

Body rash appears within 4 – 5 days after the symptoms start. It might be accompanied by a high fever. These are the symptoms of measles.

Measles, if not treated properly can lead to chronic complications like pneumonia, encephalitis etc. The other complications may include:

Doctor confirms measles by examining a skin rash and other symptoms or characteristics of the disease. If it is not possible to confirm by examining visible symptoms, the doctor might advise for a blood test.

There is no specific treatment for measles. The virus and symptoms generally disappear within two to three weeks but the doctor might recommend the following treatments:

In the case of children, It is advised that they should be closely monitored by a doctor. Children should be placed in isolation until they are fully recovered.

As there is no specific treatment, it is advised to follow all necessary precautions which help to prevent measles. Children should be vaccinated within 12 months of their birth and the second dose should be between the ages of 4 and 6. MMR is a vaccine that prevents three diseases like mumps, measles, and rubella. Treating the disease in early stages is also very important, especially for children.