Peptide Bond And Other Bonds In Biomolecules

We would be discussing some of these bonds like peptide bond, glycosidic bond, etc in this article in order to gain a better understanding. 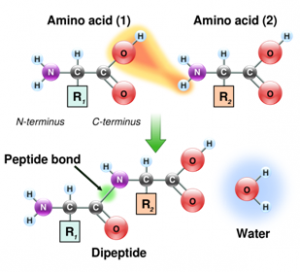 Proteins consist of polypeptides as they are polymers of amino acids. The amino acids are linked through peptide bonds. An amino acid has two functional groups, the amine (-NH­2) group, and the carboxylic acid (-COOH) group. A peptide bond is an amide bond (-CONH) between the –NH2 group and the –COOH group of adjacent amino acids. A water molecule is eliminated when a peptide bond is formed.

In DNA double helix, the backbone of the strands consists of deoxyribose sugar and phosphate groups. They are linked by phosphodiester bonds. 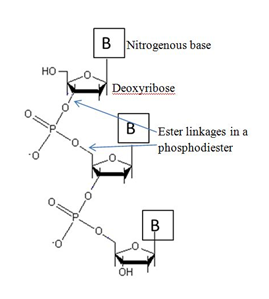 An ester group is formed by dehydration of an acid and an alcohol group. In a phosphodiester linkage, two acidic groups of phosphate radical form ester linkages with OH groups of adjacent ribose molecules.

Base pairing in DNA Base pairing in DNA

This was just an introduction to the different types of chemical bonds that exist in biomolecules. To know more about this topic, visit BYJU’S Biology.