Rain is droplets of water that are condensed as a result of evaporation. During the water cycle formation of clouds takes place. Rain is also called precipitation.

Water is absorbed from different water bodies, a large amount of which vaporizes and enters the atmospheric air. Water gets evaporated because of various other biological processes as well. This hot air containing water molecules thus rises above the ground level expands and cools after reaching a suitable height. On cooling, water vapour turns into droplets of water, this process is called condensation. It is facilitated by substances such as dust and other particles suspended in the air which accelerates the process and forms the nucleus for these droplets. The cluster of such droplets clamps together to form huge water masses appearing to us as clouds. Once they grow big and heavy, they fall down to the ground as rain. Hence, they are precipitations. These precipitations are sometimes in the form of snow, hail or sleet if the temperature is low.

How Are Clouds Formed?

Clouds are formed as a result of water molecules arising from the earth’s surface through evaporation by the sun as they weigh less. These water vapours cooldown on reaching higher altitudes and stop escalating once they reach saturation known as the frost point. Droplets now float in the air and form clusters with other droplets, finally combining to form huge water masses which appear to us as clouds. 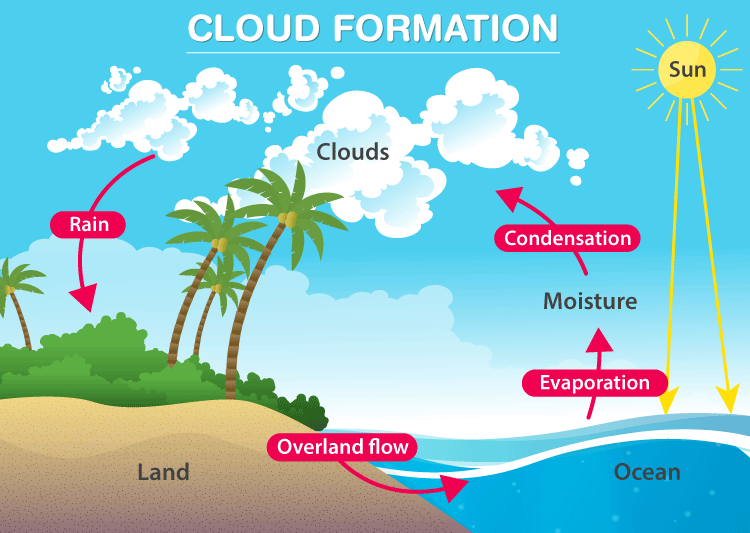 It is a hydrological cycle involving the regular circulation of water in different states of matter. It takes place in the following stages:

To get more information on formation of clouds and water cycle, don’t forget to register at Byju’s.

Test your knowledge on Rain
Q5