What is Rheumatoid Arthritis?

Rheumatoid arthritis is the long-lasting, most common type of autoimmune disorder that causes chronic inflammation of the joints and other parts of the body. This occurs when the immune system of individuals mistakenly attacks their joint lining capsule or body tissues. In some people, it is found that Rheumatoid Arthritis (RA) also damages skin, lungs, eyes, kidneys and blood vessels. 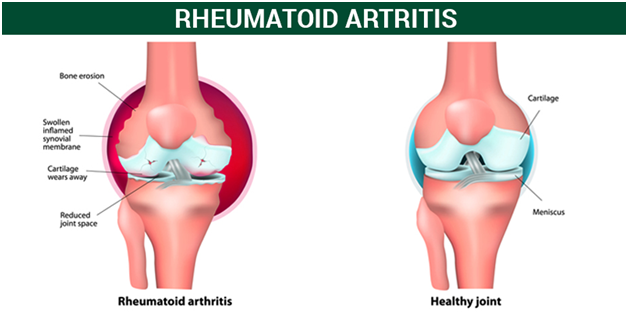 However, in some cases, the immune system mistakenly sends antibodies to attack their lining of joints. This is the root cause of Rheumatoid Arthritis. The reason why the immune system behaves like that is still unknown.

This autoimmune disorder is observed more in women compared to men. Some evidence suggests that people who smoke have more chances of developing Rheumatoid Arthritis.

It is difficult to diagnose Rheumatoid Arthritis in the earlier stages because the symptoms might resemble the symptoms of other diseases. Blood tests, x rays, and imaging tests are used to diagnose this disorder.

The symptoms can vary from mild to severe and occurs throughout the body, which includes:

These symptoms usually begin from small joints and later spread to all joints. In the case of 15 to 20 per cent of people, symptoms may be observed in body parts, including the skin, lungs, kidneys, blood vessels, and liver.

There is no treatment in particular for Rheumatoid Arthritis. Treatment generally includes a combination of educating the patient, rest, exercise, medications and occasional surgeries.

Medications undergone in treating this disorder are as follows:

The main goal of the treatment is:

Diet and exercise are an important part of our lifestyle, and the quality of our life depends on the diet we follow. Getting plenty of exercise helps in coping with rheumatoid arthritis. Exercise can help to reduce the pain, inflammation and stiffness of joints and provides more flexibility.

There are many foods which can reduce inflammation and reduce the joint pains. Many studies have shown that the following foods might prove helpful for the patients suffering from this arthritis disorder.

1. What is rheumatoid arthritis?

Rheumatoid arthritis is an autoimmune disorder that causes chronic inflammation of the joints and other parts of the body.

2. What are the causes of rheumatoid arthritis?

3. What are the symptoms of rheumatoid arthritis?

Symptoms include fever, joint pain, swollen joints, lack of flexibility in the joints, and morning stiffness or stiffness in joints.

For more information on arthritis, types of arthritis, symptoms and their causes, visit BYJU’S.