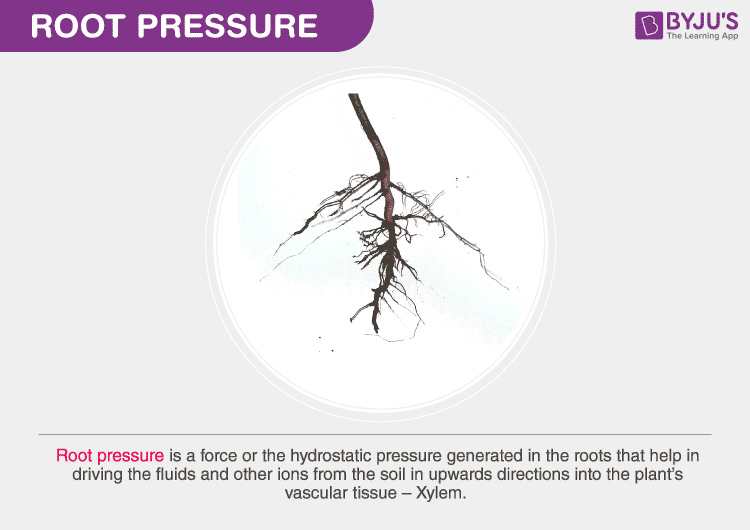 Root pressure is a force or the hydrostatic pressure generated in the roots that help in driving the fluids and other ions from the soil in upwards directions into the plant’s vascular tissue – Xylem.  This process is produced by osmotic pressure in the cells of the root. Root pressure is more common during the spring seasons before the leaves develop, and the rate of transpiration is rapid.

The effects of root pressure can be seen only during the night and early morning as the rate of evaporation is very low. The main contribution of the root pressure is to establish the continuous movements of the water molecules in the xylem, which can be affected by transpiration. 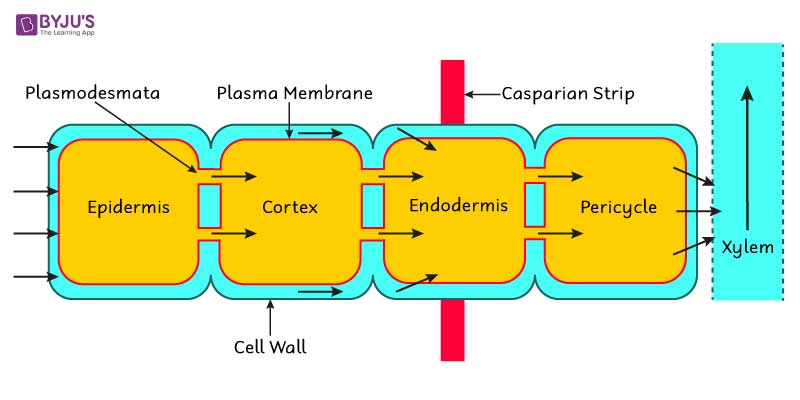 During root pressure, water passes through the root tissues freely, but the minerals do not (the root is a semi-permeable barrier). As per the natural phenomenon of osmosis,  the water molecules naturally flow from the area of low mineral concentration to the area of high mineral concentration, and this flow of water into the root pressurizes it. This process of osmosis is very common in all other animal and plant cells.

For example, in non-woody plants, osmosis allows plant cells to accumulate water and be plump enough to keep the plant upright.

Root pressure can be easily observed when the trees are chopped down during the spring season. When a particular tree is chopped or sawed down, we can generally see a stump that bleeds sap. From this observation, it is easy to conclude that here is the explanation for sap flow in maple, sap rising to the top of tall trees, and sap movement coming from a “pump” in the roots. The sap bleeding from stumps and other wounds in some tree species is the result of root pressure, a phenomenon that occurs only under limited circumstances at certain times of the year.

Root pressure has been noted in many tree species but is most prominent in birch trees, and it is responsible for the birch syrup industry. Some of the highest root pressures measured have been recorded in birch trees, and additionally, it has sweet sap, albeit much less sweet than most sugar maples. The birch sugaring season is described as beginning when producers are “seeing the first butterfly” and generally lasts for about 3 weeks, ending when the leaves emerge.

This is a good description of the time when the soil is warming. Buckets are hung on the trunk, as root pressure is strong enough to push sap well beyond ground level. Collection occurs from tapholes during the hours when the wood is thawed enough to allow the sap to flow. A great deal of boiling is necessary to produce birch syrup at a sugar concentration that matches the concentration of maple syrup.

Birch Syrup or Birch Sugaring is a truly unique flavour from the forests of Alaska and other northern parts of the globe. Birch syrup is very rarely found as it is difficult to produce. As per the estimations, the annual production of birch syrup worldwide is less than 5,000 gallons.

To know more about this root pressure, visit BYJU’S.