A teacher by choice, an engineer by chance, and an entrepreneur by accident. Meet Byju Raveendran, the owner, founder, and CEO of BYJU’S – the world’s leading edtech company. 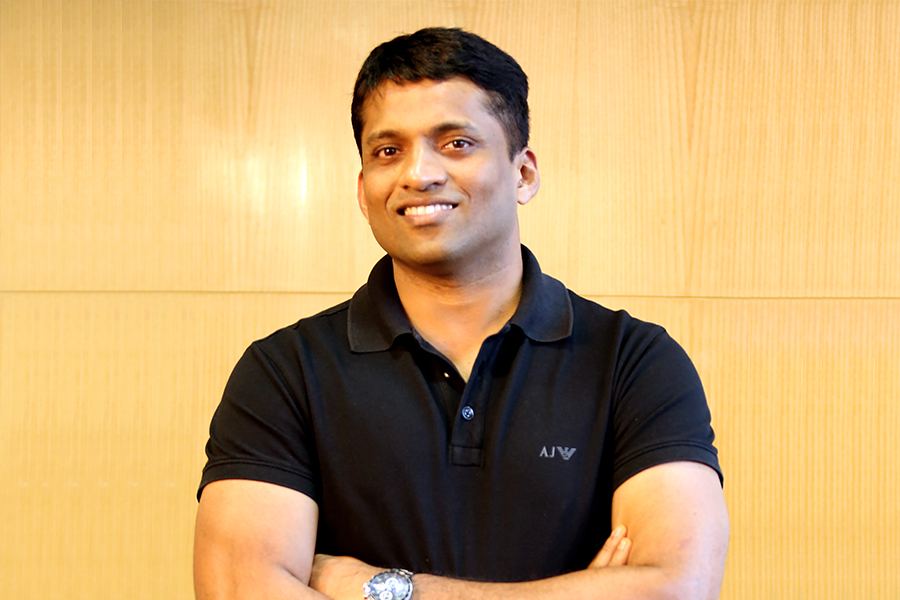 Born and raised in a small village in coastal Kerala, Byju attributes the lessons he has learned about teamwork, performing under pressure, leadership, etc to playing sports. However, despite his keen interest in physical education, the BYJU’S CEO  was also a dedicated academic student and a firm believer in ‘self-learning’ – another takeaway from the field.

This early childhood lesson has been instrumental in helping him make BYJU’S what it is today.

After completing his engineering, Byju worked abroad for a few years, and on one of his trips to India, appeared for the CAT exam. He cracked the test with a score of 100 percentile, not once but twice, and with much encouragement from friends, he began coaching students for the test. Before Byju knew it, his CAT prep classes became a rage — from 100 students, it grew to 1000+ and then to packed stadiums full of eager students.

From thereon, launching an edtech company was a clear case of the CEO’s passion intersecting with real needs — which was to make learning accessible, effective, engaging, and personalized for all students.

With this goal in mind, Byju, along with a dedicated team, founded Think & Learn Pvt Ltd in 2011 to offer learning programs to students in the K-12 segment with a unique blend of technology, content, and pedagogy.

Students have always been at the center of innovation at BYJU’S, and it was with the same outlook that the company launched its flagship product – BYJU’S The Learning App in 2015. Within three months of its launch, the app saw 2 million downloads, paving the way to transform how students learned and teachers taught.

With a holistic approach towards education, the app makes learning engaging, interactive, adaptive, and personalized through its animated videos, games, quizzes, and more. Today, the app has 100+ million downloads, 6.5 million paid subscribers, and an annual renewal rate of 86%.

Celebrating every type of learner, each and every product by BYJU’S is designed with a vision to make quality content and teachers accessible by students anywhere and to build a community of active self-learners. Through these learning programs, students can get a conceptual and contextual understanding of various subjects to understand not the “What” of learning it, but the “Why” and the “How” as well.

As BYJU’S owner and CEO,  he says one of the biggest ways to continue impacting students’ lives and creating value is partnerships and a shared vision. While helping children make the shift from passive learners to active learners by using cutting-edge technology has been at the core of his vision for the company, it was with the launch of Disney – BYJU’S Early Learn app for class 1-3 students (later upgraded to include LKG and UKG) that BYJU’S began its journey of shaping young minds in their early years and help them fall in love with learning.

In 2019, BYJU’S also joined hands with Osmo, a Palo-Alto-based educational games maker to offer learning solutions to children between three and eight. Through physical-to-digital technology and content, it aims to make students’ learning journeys engaging, immersive and personalized. In addition to teaching traditional subject matter, Osmo games foster social-emotional skills like problem-solving, creativity, and perseverance. BYJU’S integrated Osmo’s Computer Vision technology into the product for LKG, UKG and Classes 1-3 (India and US)

The Pandemic Factor and Social Initiatives

The onset of the COVID-19 pandemic in 2020 saw the rapid adoption of digital tools for learning and became an inflection point for the edtech sector.  It brought about a significant change in the mindset of parents towards online learning. As a digital-first company, BYJU’S pivoted its plans and quickly launched multiple products to address the learning needs of children in challenging times like these. The first step was making the content on the Learning app free so that children across the country could continue with their studies uninterrupted. Additionally, to provide students with scheduled learning, it accelerated the launch of LIVE classes and also introduced BYJU’S Classes – an online tutoring program. BYJU’S saw close to 50 million new students learn from the app by launching learning courses in several regional languages.

As a part of the company’s continuous endeavor and BYJU’S owner’s aim of making quality education accessible to all, BYJU’S also launched a social initiative ‘Education for All’ in 2020 to democratize education. This initiative aims to empower 5 million children from the most remote geographies and underserved communities by 2025.

Going global and scaling up

With a vision to take world-class learning products from India to the world, BYJU’S has been expanding its global footprint. Its recent acquisitions include WhiteHat Jr, a Mumbai-based programming startup focused on empowering children with coding skills. With this acquisition, the company is enabling students in the 6-18 age group across several countries like the US, UK, Australia, New Zealand, Mexico, Brazil, etc. to get access to 1:1 Math and Coding training with the BYJU’S Future School.

Also strengthening the brand’s position in the professional and higher education segment, BYJU’S acquired Singapore-headquartered Great Learning and test-prep platform Toppr in July 2021. Similarly, with the aim to broaden its footprint in the US, BYJU’S acquired the digital reading platform Epic that caters to kids aged 12 and under.

However, one of the biggest acquisitions came in April 2021 in the form of Aakash Educational Services Ltd. With the future of learning set to be blended, BYJU’S and Aakash are looking to build capabilities, create engaging, and personalized learning programs to bring together the best of offline and online learning.