A polygon is a plane figure which is bounded by finite line segments to form a closed figure. A 4-sided polygon is known as a quadrilateral.

The sum of interior angles of a quadrilateral is always 360°. The number of diagonals in a n-sided polygon is given by

Kite is a quadrilateral in which two pairs of adjacent sides are of equal length and the diagonals intersect each other at right angles. The figure shown below represents a kite. The fig 1 above represents a quadrilateral and it can be represented as: In quadrilateral ABCD, the sides AB = BC and AD = CD. Thus, as the adjacent pair of sides is equal in length, therefore ABCD is a special type of quadrilateral known as a kite.

In a kite, the diagonals intersect at right angles. This can be proved as follows.

Thus, ∆ABC is an isosceles triangle.

If length of both diagonals is given as p and q as shown in the figure given below, area (A) of kite can be given as: 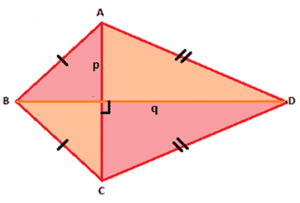 If all the sides of a kite become equal in length then that kite becomes a rhombus as sides are of equal length and diagonals are perpendicular to each other.