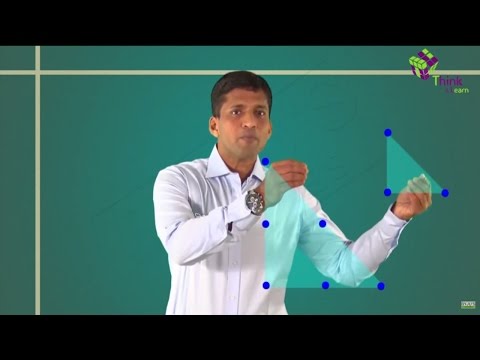 Geometry is derived from the ancient Greek terms geo and metron, which means earth and measurement respectively. It is a branch of mathematics dealing with shape, size, position, spatial relationships and properties of figures.

A point is a primitive notion upon which geometry is built according to Euclidean geometry. A point can be visualized as a circle with zero radii. A point has zero dimensions and can specify position or location. It has no length and is represented by a dot. 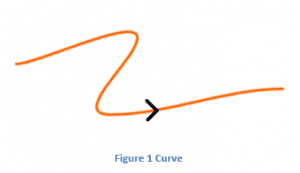 A line is a one-dimensional collection of points, which extends infinitely in both the directions. A line has no thickness and it is straight.

If we rotate ray about its end-point, the measure of its rotation is called angle between its initial and final position. 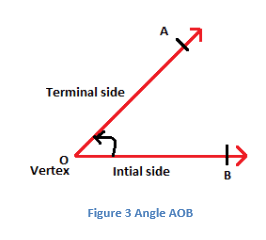 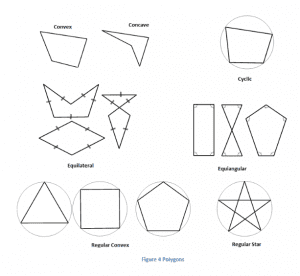 As polygons are closed figures and the minimum number of sides required for a plane figure to be closed is 3, the polygon with the least number of sides is the triangle.It has three edges and three vertices. 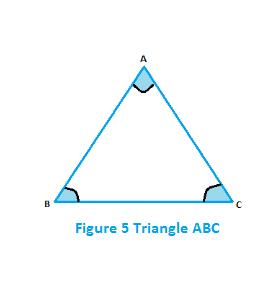 A diagonal is a line segment connecting the 2 non-consecutive vertices of a polygon.

Based on diagonals, polygons can be classified as convex and concave.

In fig. 8, the first figure represents a convex polygon, (ii) is concave polygons as diagonal BD lies outside and

For example, A square is a regular polygon as all its sides are of the same length and also the measure of each interior angle is

\(\begin{array}{l}90°\end{array} \)
,, an equilateral triangle is also a regular polygon. A rectangle, on the other hand, is irregular as the measure of its sides is not equal even though interior angles being same.

Let us consider a quadrilateral PQRS in the figure below: 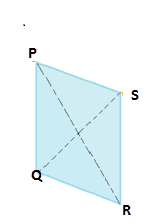 Geometry thus is a field where one could barely miss the topic of quadrilaterals as most students would have studied them during their secondary school days. But to implement what they have learned,  students should practice more with the kind of sample questions given here- NCERT solutions for understanding quadrilaterals.