EMF of a cell & Cell notation

EMF is abbreviated as the electromotive force which is defined as the maximum potential difference between the two electrodes of a voltaic or galvanic cell.

EMF of a Galvanic cell 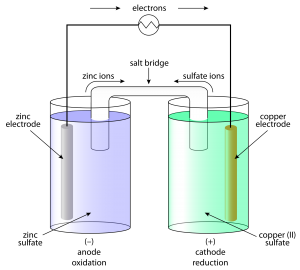 What is a galvanic cell

Some rules need to be taken care while representing an electrochemical cell. The cathode is on the right side and anode on the left side.

The cell is represented by the rule that metals are written first and then the metal ions that are present in the electrolyte. The two needs to be separated by a vertical line. For example Zn | Zn2+.

The molar concentration is written within the brackets as: Zn | Zn2+(1M)

It is the potential difference between electrodes in a galvanic cell and is measured in volts.

Test your knowledge on basic concepts of emf and cell notation!
Q5