Surface chemistry is the study of the chemical phenomena that occur at the interface of two surfaces which can be solid-liquid, solid-gas, solid-vacuum, liquid-gas, etc. Some applications of surface chemistry are known as surface engineering. There are various phenomena taking place on the surface of substances and some of them are: 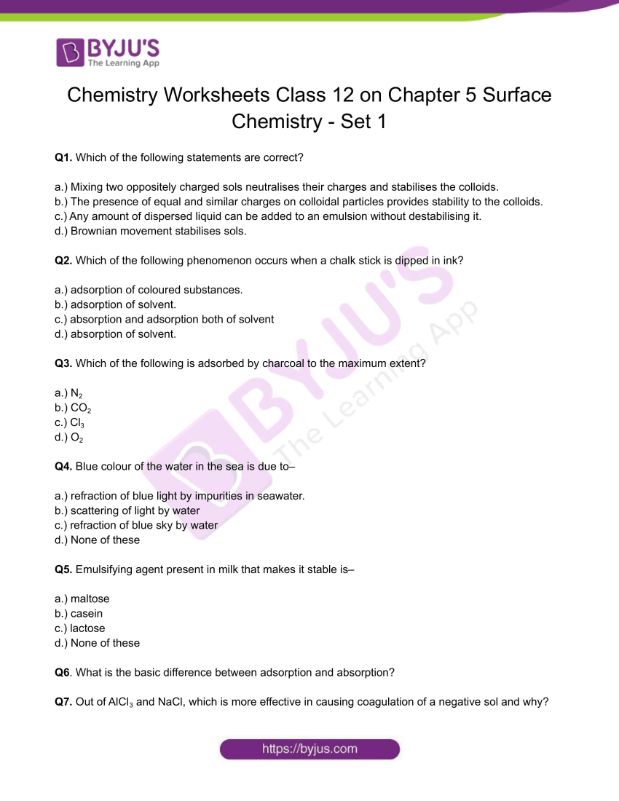 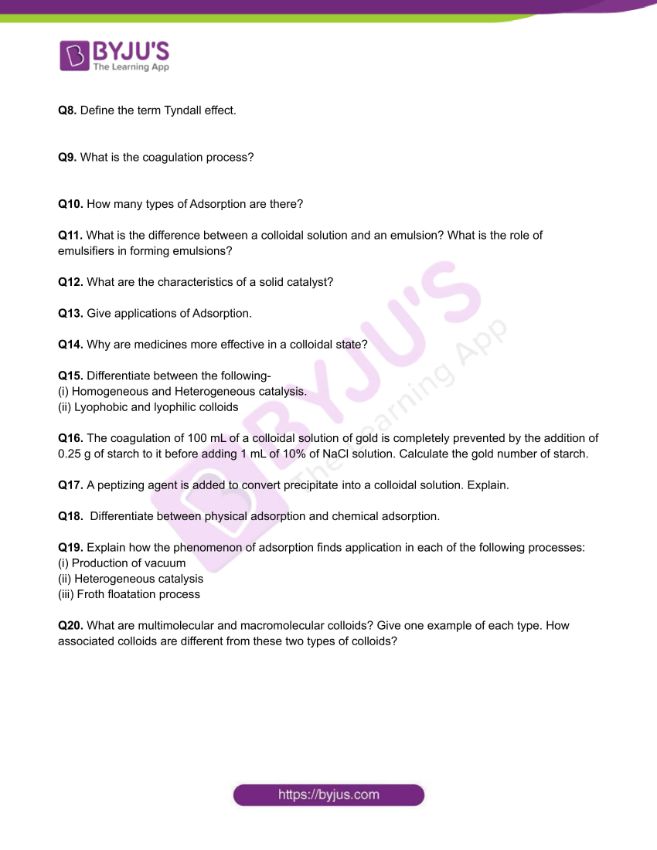 Q1. Which of the following statements are correct?

a.) Mixing two oppositely charged sols neutralises their charges and stabilises the colloids.

b.) The presence of equal and similar charges on colloidal particles provides stability to the colloids.

c.) Any amount of dispersed liquid can be added to an emulsion without destabilising it.

Q2. Which of the following phenomenon occurs when a chalk stick is dipped in ink?

a.) adsorption of coloured substances.

b.) adsorption of solvent.

c.) absorption and adsorption both of solvent

Q3. Which of the following is adsorbed by charcoal to the maximum extent?

Q4. Blue colour of the water in the sea is due to–

a.) refraction of blue light by impurities in seawater.

b.) scattering of light by water

Q5. Emulsifying agent present in milk that makes it stable is–

Q6. What is the basic difference between adsorption and absorption?

Q7. Out of AlCl3 and NaCl, which is more effective in causing coagulation of a negative sol and why?

Q9. What is the coagulation process?

Q10. How many types of Adsorption are there?

Q11. What is the difference between a colloidal solution and an emulsion? What is the role of emulsifiers in forming emulsions?

Q12. What are the characteristics of a solid catalyst?

Q13. Give applications of Adsorption.

Q14. Why are medicines more effective in a colloidal state?

Q15. Differentiate between the following-

(i) Homogeneous and Heterogeneous catalysis.

Q16. The coagulation of 100 mL of a colloidal solution of gold is completely prevented by the addition of 0.25 g of starch to it before adding 1 mL of 10% of NaCl solution. Calculate the gold number of starch.

Q17. A peptizing agent is added to convert precipitate into a colloidal solution. Explain.

Q19. Explain how the phenomenon of adsorption finds application in each of the following processes:

(i) Production of vacuum

Q20. What are multimolecular and macromolecular colloids? Give one example of each type. How associated colloids are different from these two types of colloids?