The common ion effect is an effect that suppresses the ionization of an electrolyte when another electrolyte (which contains an ion which is also present in the first electrolyte, i.e. a common ion) is added. It is considered to be a consequence of Le Chatlier’s principle (or the Equilibrium Law).

What is the Common Ion Effect?

The statement of the common ion effect can be written as follows – in a solution wherein there are several species associating with each other via a chemical equilibrium process, an increase in the concentration of one of the ions dissociated in the solution by the addition of another species containing the same ion will lead to an increase in the degree of association of ions.

An example of the common ion effect can be observed when gaseous hydrogen chloride is passed through a sodium chloride solution, leading to the precipitation of the NaCl due to the excess of chloride ions in the solution (brought on by the dissociation of HCl). 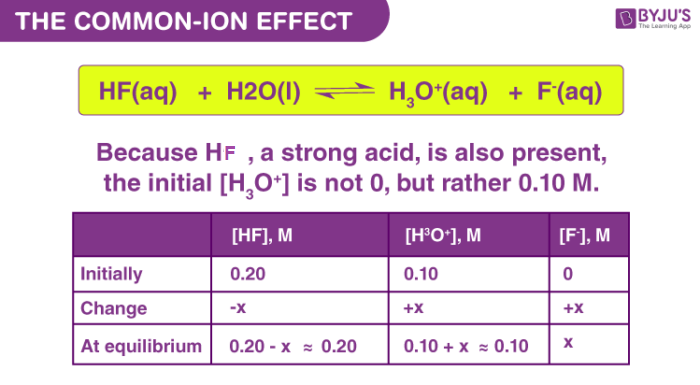 This effect cannot be observed in the compounds of transition metals. This is because the d-block elements have a tendency to form complex ions. This can be observed in the compound cuprous chloride, which is insoluble in water. This compound can be dissolved in water by the addition of chloride ions leading to the formation of the CuCl2– complex ion, which is soluble in water.

The way in which the solubility of a salt in a solution is affected by the addition of a common ion is discussed in this subsection.

However, it can be noted that water containing a respectable amount of Na+ ions, such as seawater and brackish water, can hinder the action of soaps by reducing their solubility and therefore their effectiveness.

pH and the Common-Ion Effect

Thus, the common ion effect, its effect on the solubility of a salt in a solution, and its effect on the pH of a solution are discussed in this article. For more engaging content on this concept and other related topics, register with BYJU’S and download the mobile application on your smartphone.