What are D Block Elements?

Elements having electrons (1 to 10) present in the d-orbital of the penultimate energy level and in the outer most ‘s’ orbital (1-2) are d block elements. Although electrons do not fill up ‘d’ orbital in the group 12 metals, their chemistry is similar in many ways to that of the preceding groups, and so considered as d block elements.

These elements typically display metallic qualities such as malleability and ductility, high values of electrical conductivity and thermal conductivity and good tensile strength. There are four series in the d block corresponding to the filling up of 3d, 4d, 5d or 6d orbitals.

There are 10 elements filling up the ‘d’ orbital in each series. 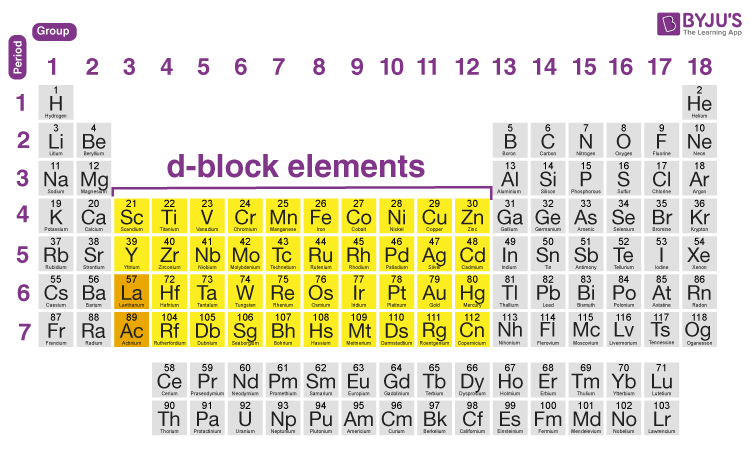 D block elements, occupy columns 3 to 12 and may have atoms of elements with completely filled ‘d’ orbital. IUPAC defines a transition metal as “an element whose atom or its cations has a partially filled d sub-shell.

This can be attributed to the relative stability of the completely filled d orbital. Zinc, Mercury, Cadmium, and Copernicium exhibit completely filled orbitals in their ground states and in their general oxidation states as well. For this reason, these metals are not considered as transition elements whereas the others are d block elements.

Along the period, from left to right, electrons are added to the 3d subshell as per the Aufbau principle and Hund’s rule of multiplicity.

Anomalies do occur in all the series, which can be explained from the following considerations.

In the second series transition metals, from niobium, electron presence in d orbitals appears to be preferred than being shared in s orbitals. Between the available s and d orbitals, the electron can either go for sharing in s-orbital or excited to d-orbital. Obviously, the choice depends on the repulsive energy it has overcome on sharing and the energy gap between the s and d-orbitals.

In the second series, s and d-orbital have the almost same energy, because of which electrons prefer to occupy the d-orbital. So from niobium, s-orbital has mostly only one electron. Third series transition metals, on the other hand, has more paired s configuration even at the expense of half-filled orbitals (Tungsten- 6s25d4). This series comes after filling up of 4f orbitals and resulting lanthanide contraction.

The reduced size results in high shielding of d orbitals by the ‘f’ electron. This shielding increases the energy gap between the s and 5d orbitals such that pairing energy is less than the excitation. Excitation of the electron does not take place in tungsten, in spite of the stability possible because of half-filled orbitals. Atomic and ionic radii of elements of all three-transition series

This higher nuclear charge leads to the larger shrinkage of radii known as Lanthanide contraction. Increase in radii due to the higher orbital will be effectively neutralized by the increase the nuclear effective charge. So, radii of second and third series elements have same atomic radii. For example, Niobium and hafnium have almost the same atomic radii. 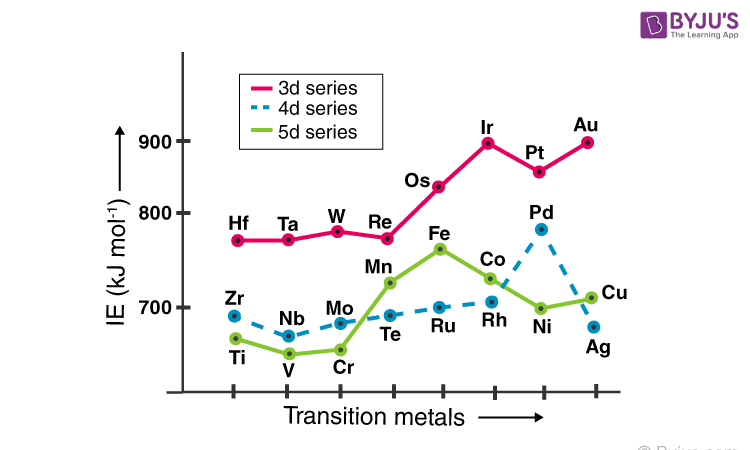 Ionization energy is the energy needed to remove the valence electron from the atom/ion and is directly related to the force of attraction on the electron. Hence, larger the nuclear charge and smaller the radii of the electron larger will be the ionization energy (IE). Ionization Energy also will be more for half-filled and fully filled orbitals.

In Co and Ni, increasing sharing of d-electrons compensate for the atomic number increase resulting in the decrease of Ionization Energy. Copper and zinc show increasing IE, as s -block elements. In the second series, elements from Niobium have single electrons in the s-orbital.

Hence, they show a gradual increase in IE with increasing atomic number. Palladium, on the other hand, has completed d-shell and no electron in s-shell. So, Pd shows the maximum IE. Because of lanthanide contraction, the attraction of electrons by the nuclear charge is much higher and hence IE of 5d elements are much larger than 4d and 3d. In 5d series, all elements except Pt and Au have filled s-shell.

Elements from Hafnium to rhenium have same IE and after IE increases with the number of shared d-electrons such that Iridium and Gold have the maximum IE.

They are very hard and have a high enthalpy of atomization and low volatility except for Copper. Hardness increases with the number of unpaired electrons. Hence Cr, Mo and W are very hard metals among d block elements. The group-12 elements (Zn, Cd and Hg) shows the exception in this regard also.

Oxidation state is a hypothetical state, where the atom appears to release or gain electrons more than the usual valency state. It is still useful in explaining the properties of the atom/ion. Transition elements/ions may have electrons in both s and d-orbitals.

Since the energy difference between s and d-orbital are small, both the electrons can involve in ionic and covalent bond formation and hence exhibit multiple(variable) valency states (oxidation states).

Trends in the Oxidation States

In fact, they are often pyrophoric, bursting into flames on contact with atmospheric oxygen. As we shall see, the heavier elements in each group form stable compounds in higher oxidation states that have no analogues with the lightest member of the group.

5. Elements may show all the Oxidation states in between the minimum and maximum.

8. Relative stabilities of the oxidation states depend on many factors, like, the stability of the resulting orbital, IE, electronegativity, enthalpy of atomization, enthalpy of hydration, etc.

Thus, the ionization of Ni to Ni2+ requires lesser energy (2490 kJ mol−1) as compared to the energy required for the production of Pt2+ (2660 kJ mol−1). Therefore, Ni2+ compounds are thermodynamically more stable than Pt2+ compounds.

On the other hand, the formation of Pt4+ requires lesser energy (9360 kJ mol1) as compared to that required for the formation of Ni4+ (11290 kJ/mol). Therefore, Pt4+ compounds are more stable than Ni4+ compounds. This is supported by the fact that [PtCl6]2+ complex ion is known, while the corresponding ion for nickel is not known.

Relative stabilities of transition metal ions in different oxidation states in the aqueous medium can be predicted from the electrode potential data. The oxidation state of a cation for which ΔH(ΔHsub + lE + ΔHhyd) or E° is more negative (for less positive) will be more stable.

Density: Among the transition series, the trend in density will be reverse of atomic radii, i.e. density increase remains almost the same and then decreases along the period. 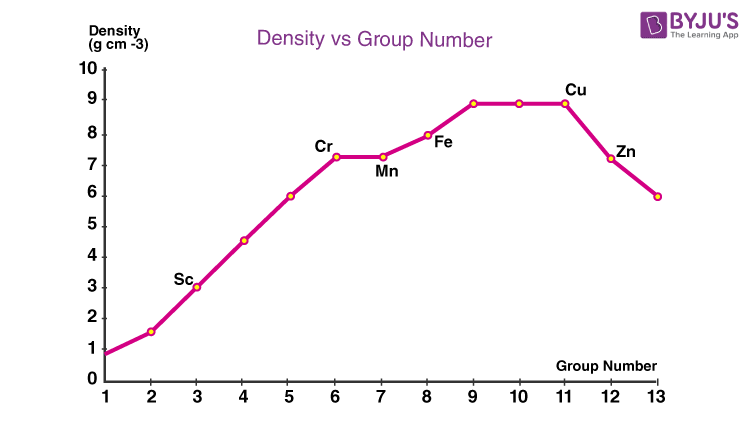 Down the column density of 4d series is larger than 3d. Due to lanthanide contraction and a larger decrease in atomic radii and hence, the volume density of 5d series transition elements are double than 4d series.

Why D Block Elements have high Melting and Boiling Point?

Unpaired electrons and the empty or partially filled d-orbitals form covalent bonding in addition to the metallic bonding by s-electrons. Because of such strong bonding, d-block elements have high melting and boiling points than s and p block elements. This trend goes till d5 configuration and then decreases as more electrons get paired in the d-orbital.

Mercury – the liquid metal: Mercury is the only metal that exists in its liquid state at room temperature. 6s valence electrons of Mercury are more closely pulled by the nucleus (lanthanide contraction) such that outer s-electrons are less involved in metallic bonding.

In the three transition series

This indicates that the transition metals become steadily less reactive and more “noble” in character. The relatively high ionization energies, increasing electronegativity, and decreasing low enthalpies of hydration make metals (Pt, Au) in the lower right corner of the d block as unreactive that they are often called the “noble metals.” 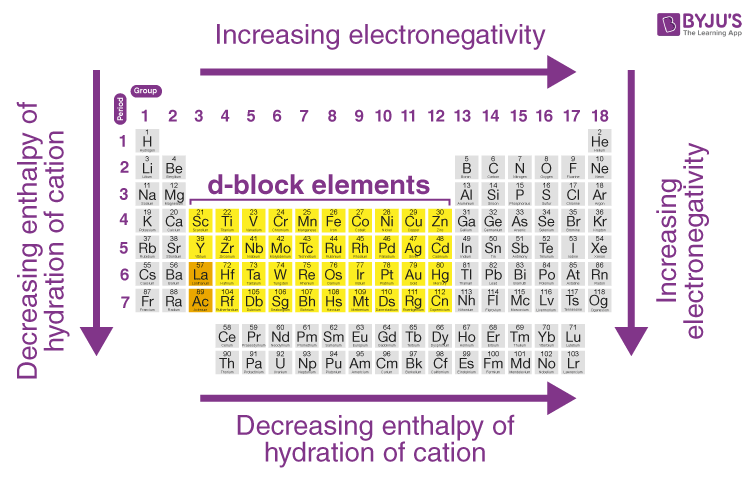 Materials are classified by their interaction with the magnetic field as:

Compounds of d block elements have a variety of colours. When a frequency of light is absorbed, the light transmitted exhibit a colour complementary to the frequency absorbed. Transition element ions can absorb the frequency in the visible region to use it two ways and produce visible colour.

One way is the excitation of an electron to a higher energy level. In transition element ions, the presence of d-electron and empty d-orbital shall result in colour formation. Valence electron excitation and de-excitation. This is called d-d transition.

D-orbitals are generally degenerate and have the same energy. Presence of ligands that can form coordinate bonds with these ions, remove the degeneracy and split them into two groups namely eg and t2g d-orbitals. The energy difference (∆E) depends on the strength of the incoming ligand.

Electrons in the lower d-orbitals can be excited into the higher d-orbitals by absorbing energy in the visible region (λ=400-700nm) and transmit (give) a colour complementary to it.

Cupric ion is colourless and in the presence of water molecules becomes blue in colour.

a) Colour of the ions varies with its oxidation state. The Cr6+ as in potassium dichromate yellow in colour, whereas Cr3+ and Cr2+ are generally green and blue respectively.

c) Transition metal ions which have:

Ligands may donate their p electrons into the empty d orbitals of metal ions. This interaction called as ligand-metal / metal-ligand or dπ – pπ bonding also may give colour to the compounds.

Complex compounds are compounds wherein a number of neutral molecules or anions are bound to a metal. Metals which are a part of the d block elements form many complex compounds owing to their small ionic size, high charge, and relative availability of d orbitals for the formation of bonds.

Transition metal and their ions With their larger nuclear charge and smaller size can attract electrons and Receive lone pair of electrons from anions and neutral molecules into their empty d-orbitals forming coordinate bonding.

Catalysts are important for the industrial bulk production of many chemicals. Many d-block elements as metals are in their ionic form are being used as a catalyst on many chemical and biological reactions.

Iron in Haber’s process to make ammonia, vanadium pentoxide in the manufacture of sulphuric acid, titanium chloride as Zigler Natta catalyst in polymerization and Palladium chloride in the conversion of ethylene to acetaldehyde are some very important commercial catalytic processes involving d block metals.

Most transition elements act as good catalyst because of,

They take the reaction through a path of low activation energy by:

Atomic radii of the transition elements in any series are not much different from each other. As a result, they can very easily replace each other in the lattice and form solid solutions over an appreciable composition range. Atoms within 15% of the difference in radii can form alloys.

Various steels are alloys of iron with metals such as chromium, vanadium, molybdenum, tungsten, manganese etc. Some important alloys are:

Transition metal has a void in their crystal lattice structure. Small non-metallic atoms and molecules like hydrogen, boron, carbon etc can be trapped in the void during crystal structure formation. These are called interstitial compounds. They are neither ionic nor covalent and non-stoichiometric as in TiH1.7, VH0.56.

Interstitial compounds have the following properties:

Examples for the interstitial compounds that are formed with transition metals are TiC, Mn4N, Fe3H, and TiH2.

Transition metal compounds of different oxidation state may sometimes present together. They may be formed by solid structure defect or by the prevalent conditions. But, this mixture behaves like a single compound.

The D Block Elements form some compounds of vital industrial importance. Some such compounds include:

This compound is considered very important in the leather industry. It is also used as an oxidant in most azo compound preparing processes.

The permanganate ion exhibits diamagnetism due to the absence of unpaired electrons in it. Potassium permanganate is also used as an oxidant in the preparation of various products in organic chemistry. It also finds use in the bleaching of cotton, silk, and wool. It can also be used for the decolourization of oils owing to its strong oxidizing ability.