A polymer is a large molecule or a macromolecule which essentially is a combination of many subunits. The term polymer in Greek means ‘many parts’. Polymers can be found all around us. From the strand of our DNA, which is a naturally occurring biopolymer, to polypropylene which is used throughout the world as plastic.

Polymers may be naturally found in plants and animals (natural polymers) or may be man-made (synthetic polymers). Different polymers have a number of unique physical and chemical properties, due to which they find usage in everyday life.

Polymers are all created by the process of polymerization wherein their constituent elements, called monomers, are reacted together to form polymer chains, i.e., 3-dimensional networks forming the polymer bonds.

The type of polymerization mechanism used depends on the type of functional groups attached to the reactants. In the biological context, almost all macromolecules are either completely polymeric or are made up of large polymeric chains.

Polymers cannot be classified under one category because of their complex structures, different behaviours and vast applications. We can, therefore, classify polymers based on the following considerations.

Classification of Polymers based on the Source of Availability

There are three types of classification under this category, namely, Natural, Synthetic, and Semi-synthetic Polymers.

They occur naturally and are found in plants and animals. For example, proteins, starch, cellulose, and rubber. To add up, we also have biodegradable polymers called biopolymers.

They are derived from naturally occurring polymers and undergo further chemical modification. For example, cellulose nitrate, and cellulose acetate.

These are man-made polymers. Plastic is the most common and widely used synthetic polymer. It is used in industries and various dairy products. For example, nylon-6, 6, polyether’s etc.

Classification of Polymers based on the Structure of the Monomer Chain

This category has the following classifications:

The structure of polymers containing long and straight chains falls into this category. PVC, i.e. poly-vinyl chloride, is largely used for making pipes and electric cables is an example of a linear polymer.

When linear chains of a polymer form branches, then such polymers are categorized as branched chain polymers. For example, Low-density polythene.

They are composed of bifunctional and trifunctional monomers. They have a stronger covalent bond in comparison to other linear polymers. Bakelite and melamine are examples in this category.

Other Ways to Classify Polymers

Classification Based on Polymerization

Classification Based on Monomers

Classification Based on Molecular Forces

A few examples of a hydrocarbon backbone polymer are polypropylene, polybutylene, and polystyrene. Also, there are polymers which, instead of carbon, have other elements in their backbone. For example, Nylon, contains nitrogen atoms in the repeated unit backbone.

On the basis of the type of the backbone chain, polymers can be divided into:

On the basis of their synthesis:

The polymers which are degraded and decayed by microorganisms like bacteria are known as biodegradable polymers. These types of polymers are used in surgical bandages, capsule coatings and in surgery. For example, Poly hydroxybutyrate co vel [PHBV]

These polymers are stable at high temperatures. Due to their high molecular weight, these are not destroyed even at very high temperatures. They are extensively used in the healthcare industries, for making sterilization equipment and in the manufacturing of heat and shock-resistant objects.

Few of the important polymers are:

Polypropylene: It is a type of polymer that softens beyond a specific temperature allowing it to be moulded, and on cooling, it solidifies. Due to its ability to be easily moulded into various shapes, it has a lot of applications.

A few of which are in stationary equipment’s, automotive components, reusable container speakers and much more. Due to its relatively low energy surface, the polymer is fused with the welding process and not using glue.

Polyethene: It is the most common type of plastic found around us. Mostly used in packaging from plastic bags to plastic bottles. There are different types of polyethene, but their common formula is (C2H4)n.

Some Polymers and their Monomers

This is also called as chain growth polymerization. In this, small monomer units join to form a giant polymer. In each step, the length of the chain increases. For example, Polymerization of ethane in the presence of Peroxides

In this process, two different monomers join to form a polymer. Synthetic rubbers are prepared by this polymerization. For example, BUNA – S.

How to Calculate Molecular Mass of Polymers?

There are two types of average molecular masses of Polymers:

\(\begin{array}{l}\bar{M_n}\end{array} \)
is determined by colligative properties such as Osmotic Pressure.

If m1, m2, m3…. Are the masses of a macromolecule with molecular masses M1, M2, M3…, respectively, then weight average molecular mass of the polymer is given by

Here we will list some of the important uses of polymers in our everyday life.

How do polymers have different physical properties? Give examples.

What is the vulcanization of rubber?

Natural rubber is highly elastic to be of poor physical stability. Adding 5% of sulphur enhances the crosslinking of the linear chains and thus, improves the stiffening of the rubber for an application like vehicle tires.

Match the column A with B.

What are biodegradable polymers? Give examples.

These polymers have functional groups found in the natural polymers. Example: Poly β-hydroxybutyrate -co-β-hydroxy valerate (PHBV). This can be degraded by bacterial presence.

What do you mean by Engineering plastics and synthetic metal?

These polymers possess high strength and resistance to chemical, thermal, and abrasion, similar to ceramics and metals for use in engineering applications. Examples: Silicone, Polycarbonate, ABS, and Polysulfone.

The polymer that is similar to the metal in terms of its electrical, electronic, magnetic, and optical properties is termed as ‘intrinsically conducting polymer (ICP)’ or ‘synthetic metal’.

Stay tuned with BYJU’S to know more about polymers, biopolymers and other interesting chemistry topics. 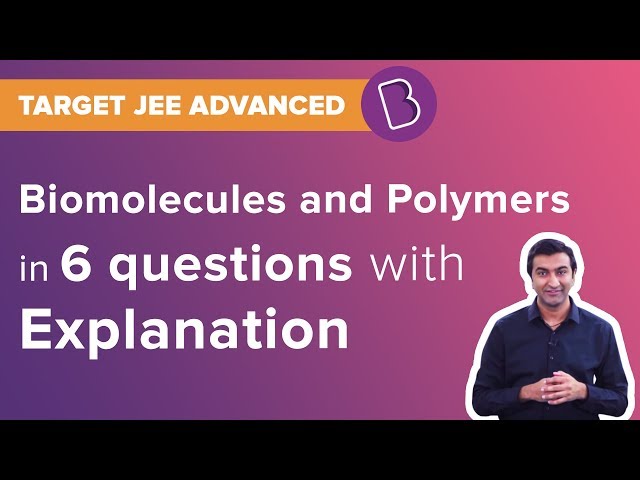 Test Your Knowledge on Polymers
Q5