What are Van der Waals Forces?

Van der Waals forces are weak intermolecular forces that are dependent on the distance between atoms or molecules. These forces arise from the interactions between uncharged atoms/molecules.

For example, Van der Waals forces can arise from the fluctuation in the polarizations of two particles that are close to each other.

In the group of forces that fall under the category of ‘weak chemical forces’, Van der Waals forces are the weakest. They are known to rapidly vanish when the distance between the interacting molecules increases. The strengths of Van der Waals forces typically range from 0.4 kJ.mol-1 to 4 kJ.mol-1. 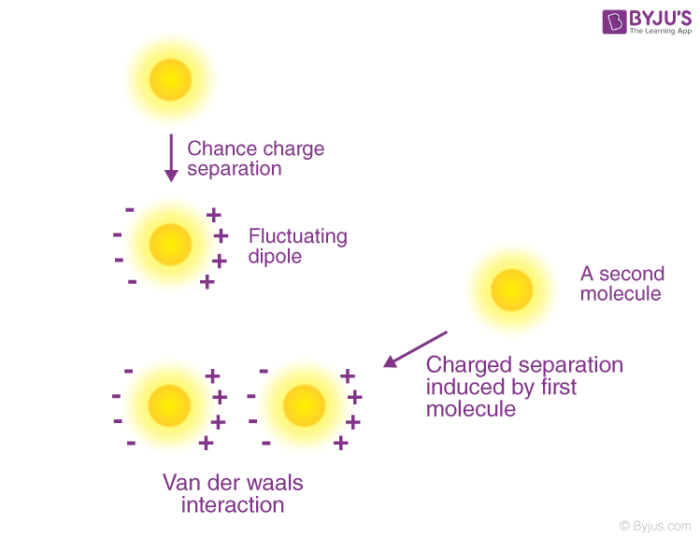 An illustration detailing the induced formation of a dipole in an atom/molecule due to a fluctuating dipole in another atom/molecule is provided above. The adsorption of gaseous molecules to the surface of an adsorbent and the cohesion of condensed phases can be accounted for by Van der Waals forces. 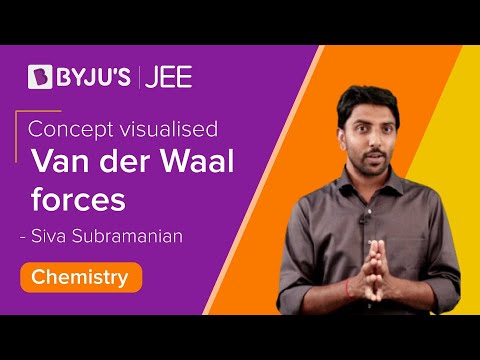 These forces are named after the Dutch physicist Willem Hendrik Keesom. It is important to note that Keesom interactions only originate from the interactions between two permanent dipoles and are temperature dependent.

Unlike Keesom interactions, Debye forces are not dependent on temperature. These forces are named after the Dutch-American physical chemist Peter Debye.

These forces are believed to be the weakest of all Van der Waals forces. The strength of the London dispersion force between two atoms/molecules depends entirely on the polarizability of the atom/molecule.

1. Number of Electrons Held by the Atoms/Molecules

2. Shape of the Molecule

Long, unbranched molecules tend to feature stronger dispersion forces than branched, short-chain molecules. For example, the structural isomers butane and isobutane (2-methyl propane) have different boiling points despite having the same chemical formulae. The boiling point of butane is -0.5oC and that of isobutane is -11.7oC.

Are Hydrogen Bonds a Type of Van der Waals Force?

Van der Waals forces can develop due to the following types of interactions:

What type of bond is van der Waals?

After one atom forms a random dipole, the next atom forms an induced dipole. Van Der Waals Bonding is the form of bonding seen in N2 molecules.

What is Vander Wall interaction?

To learn more about Van der Waals forces and other related concepts (such as dipole moment), register with BYJU’S and download the mobile application on your smartphone.