Inductive Effect refers to the phenomenon wherein a permanent dipole arises in a given molecule due to the unequal sharing of the bonding electrons in the molecule. This effect can arise in sigma bonds, whereas the electromeric effect can only arise in pi bonds.

What is Inductive Effect?

When an electron-releasing or an electron-withdrawing species is introduced to a chain of atoms (generally a carbon chain), the corresponding negative or positive charge is relayed through the carbon chain by the atoms belonging to it. This causes a permanent dipole to arise in the molecule and is referred to as the inductive effect.

An illustration describing the inductive effect that arises in a chloroethane molecule due to the more electronegative chlorine atom is provided above.

Inductive Effect on Acidity and Basicity

If R had been electron-donating, then the conjugate base would be destabilised because of inter-electronic repulsions.

For Example, formic acid ( HCOOH) is more acidic than acetic acid (CH3COOH) due to the +I inductive effect of the methyl group attached to the carboxylic acid group.

Consider, the acidity of mono-, di- and trichloroacetic acid. 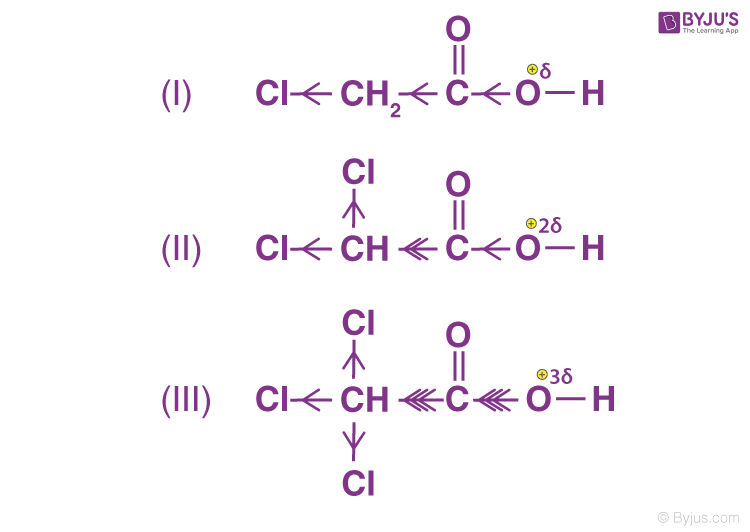 It can be said that the presence of three Cl atoms make oxygen highly electron deficient and thereby, polarising the O-H bond the most. Therefore, the acidity order for the above compounds would be, III > II > I.

When an electronegative atom, such as a halogen, is introduced to a chain of atoms (generally carbon atoms), the resulting unequal sharing of electrons generates a positive charge which is transmitted through the chain.

This causes a permanent dipole to arise in the molecule wherein the electronegative atom holds a negative charge and the corresponding effect is called the electron-withdrawing inductive effect, or the -I effect.

When a chemical species with the tendency to release or donate electrons, such as an alkyl group, is introduced to a carbon chain, the charge is relayed through the chain and this effect is called the Positive Inductive Effect or the +I Effect

Inductive Effect on Stability of Molecules

The charge on a given atom and the charge on a group bonded to the atom play a strong part when determining the stability of the resulting molecule as per the inductive effect.

An example of this can be observed when a group displaying the -I effect is bonded to a positively charged atom and the positive charge on the resulting molecule is amplified, reducing its stability.

On the other hand, when a negatively charged atom is introduced to a group displaying a -I effect, the charge disparity is somewhat quenched and the resulting molecule would be stable as per the inductive effect.

When a group displaying the -I effect is bonded to a molecule, the electron density of the resulting molecule effectively reduces, making it more likely to accept electrons and thereby increasing the acidity of the molecule. 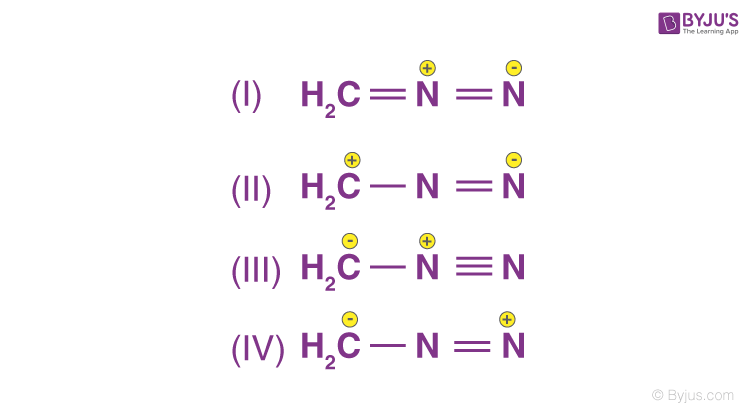 Give the stability of the following canonical forms

The structure I and III have more covalent bonds and are more stable than II and IV. Between I and III, I is more stable because the negative charge is on an electronegative element.

Between II and IV, II is more stable because of the same reason as said above. 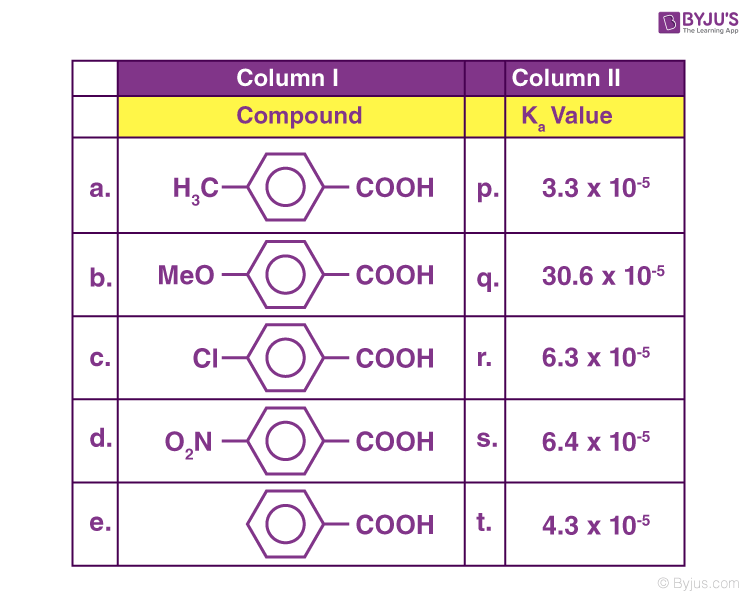 -Me group is a +I group whereas -OMe is an +R group, so –OMe decreases the acidity more strongly than -Me

Therefore the order is, d>c>e>a>b 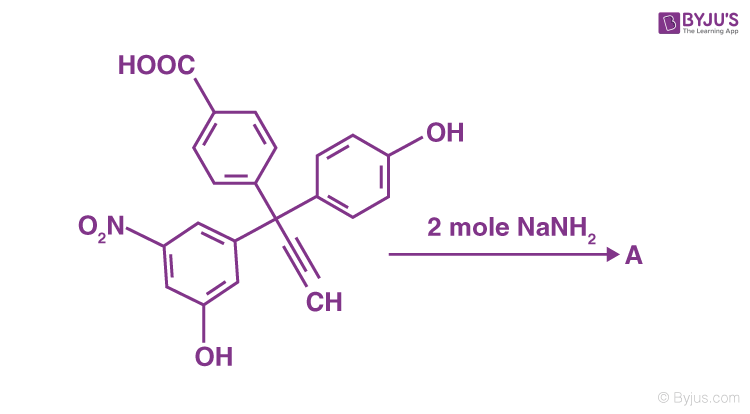 Since two moles of the base are used, two protons would react.

The order of acidity of the protons are

So the product would be, 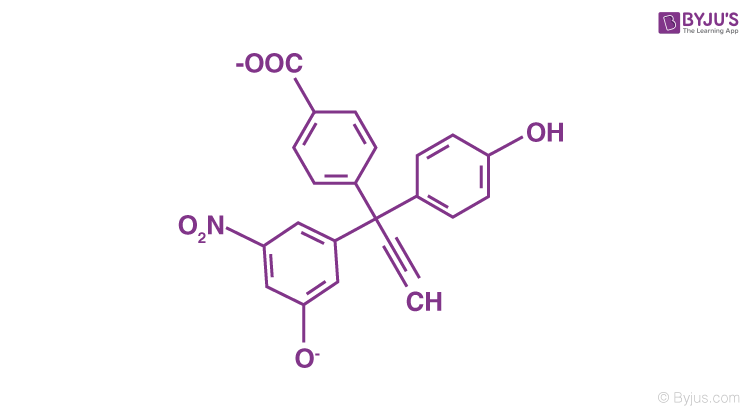 Illustration 4: The order of acidity of the following compounds, is 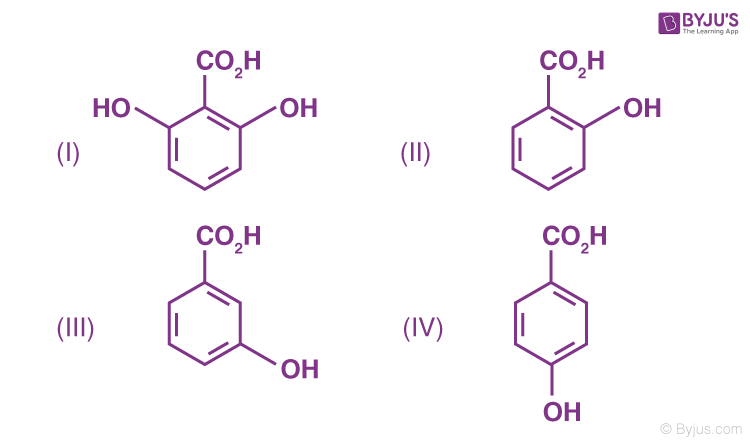 Solution: To find out the acidity of the compounds, remove the proton and check the stability of the conjugate base formed.

CB of structures I and II are stabilised by intramolecular hydrogen bonding ( I more than II).

Between the meta and para isomer, meta would be more acidic due to –I effect of oxygen.

Therefore, the order is, I>II>III>IV

Solution: The most basic among the four is I. This is because structures II and IV are aromatic. Between I and III, I is more basic due to the presence of an oxygen atom in III, which decreases basicity by –I effect.

Between II and IV, II would be more basic because in IV, the lone pair on nitrogen is delocalised to make the compound aromatic. The non-availability of the lone pair for donation makes IV the least basic.

A tabular column highlighting the key differences between the electromeric and the inductive effects can be found below.

Thus, it can be understood that the +I and -I effects play a vital role in the stability as well as the acidity or basicity of molecules.

How to Check the Acidity of Organic and Unsaturated Compounds?

To check for acidity among unsaturated compounds, check the hybridisation of the carbon involved. More the s-character on the carbon more is its electronegativity and hence, more is the acidity.

Therefore the most acidic amongst alkynes, alkenes and alkanes is: Alkynes > Alkenes > Alkanes

If there is a competition among two groups that are electron withdrawing via resonance and via induction, preference is given to the resonance because it affects the whole molecule.