Hydrocarbons are organic compounds that are entirely made up of only two kinds of atoms – carbon and hydrogen. Typically, hydrocarbons are colourless gases that have very weak odours. Hydrocarbons can feature simple or relatively complex structures and can be generally classified into four subcategories, namely alkanes, alkenes, alkynes, and aromatic hydrocarbons. The study of hydrocarbons can provide insight into the chemical properties of other functional groups and their preparation. Furthermore, hydrocarbons such as propane and butane are used for commercial fuel purposes in the form of Liquefied Petroleum Gas (LPG). Benzene, one of the simplest aromatic hydrocarbons, serves as the raw material for the synthesis of many synthetic drugs.

The molecular formula for these compounds is CxHy. The existence of hydrocarbons is seen in plants and trees. For example, Carotenes is an organic pigment that is found in green leaves and carrots. These hydrocarbons make up to 98% of natural crude rubber. Further, they possess large internal energy which renders them their importance.

Classification and Types of Hydrocarbons Due to their different molecular structures, the empirical formula of hydrocarbons is also different from each other. For instance, alkanes, alkynes or alkenes, the amount of bonded hydrogen decreases in alkenes and alkynes. This is mainly due to the “self-bonding” or catenation of carbon that prevents the complete saturation of the hydrocarbon by the formation of double or triple bonds. The ability of hydrocarbons to bond to themselves is known as catenation. With such capabilities, they can form more complex molecules like cyclohexane and in rare instances, aromatic hydrocarbons like benzene.

Meanwhile, cracking of Hydrocarbons is a process in which heavy organic molecules are broken down into lighter molecules. This is accomplished by supplying an adequate amount of heat and pressure. Sometimes catalysts are used to speed up the reaction. This process plays a very important role in the commercial production of diesel fuel and gasoline.

Alkanes with 10 C-atoms or less are generally gases at room temperatures more than 10 C-atoms, the molecules are gases or liquid. Alkanes generally have low boiling and melting points owing to their weak Vanderwal’s interaction.

Alkanes having the same molecular mass but having a different number of branches, the one with less branching has more boiling point this is because of Vanderwal’s force weak as the area increases.

For example, CH3-CH2-CH2-CH3 has more boiling point. Alkanes are very feebly soluble in water but they are soluble in non-polar solvents such as Benzene, CCl4, etc.

From alkenes and alkynes

The alkanes can be produced from alkenes or alkynes through hydrogenation. H2 gas is passed over a metal surface such as Ni, Pt along with the alkenes to produce alkane.

The above reaction is called “Sabatier-Sender son’s” reaction. Other catalysts which can be used are Pt, Pd-BaSo4, Adams catalyst (Pt2O) or Wilkinson catalyst (R3PRhCl), etc.

Alkyl halides can be converted to alkanes through various methods. They are as follows.

Note: Alkanes with only even number of carbons atoms can be produced.

The reducing agents which can be used are LiAlH4, NaBH4, NaNH2, etc.

3. From Carboxylic acids through Decarboxylation:

Because of steric hindrance

Because of the stability of carbonation.

Alkynes can be prepared from alkyl halides and alcohols.

All addition reactions in alkenes are possible. 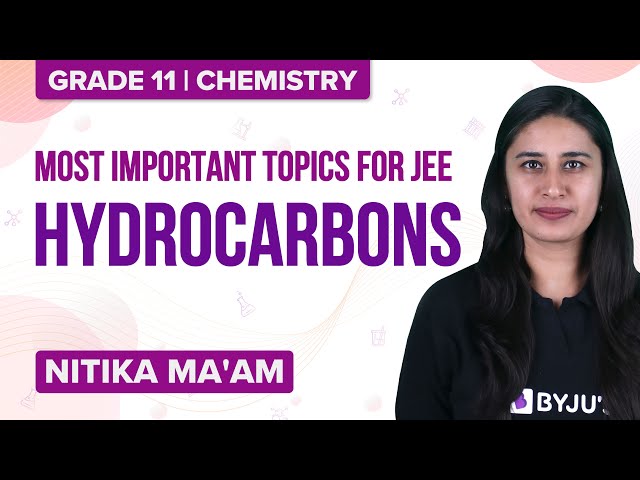 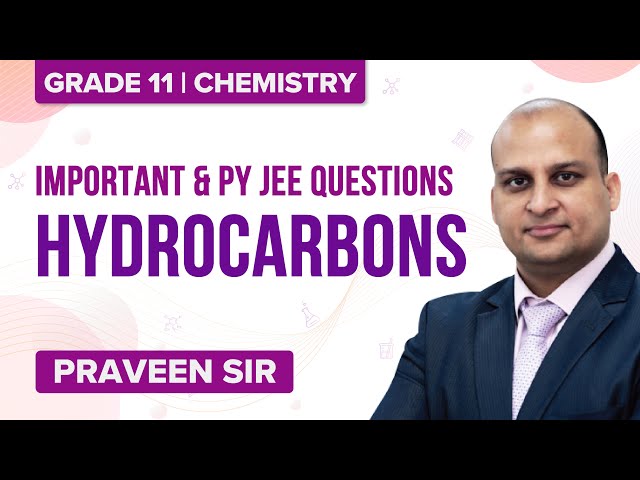 What are the 4 types of hydrocarbons?

What are hydrocarbons made up of?

Hydrocarbons are made up of the elements carbon and hydrogen. These compounds are dominant in crude oil, coal tar and waste products of pyrolysis.

What are the characteristics of hydrocarbons?

Why are alkanes least reactive hydrocarbons?

What is the product of ozonolysis of ethene?

Ethene on ozonolysis forms ozonide, which on further reduction with zinc dust forms 2 molecules of formaldehyde.
Test your Knowledge on Hydrocarbons
Q5