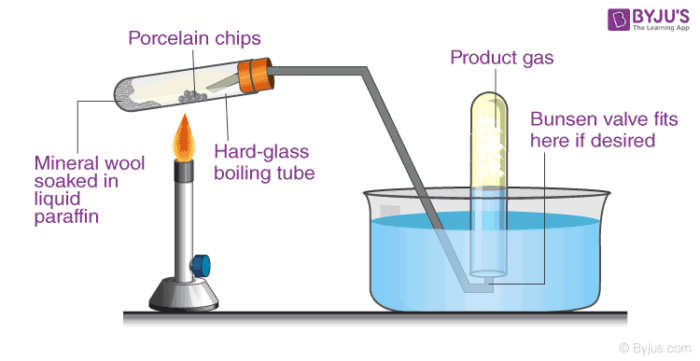 During this process, it involves numerous chemical reactions based on free radicals. Some vital reactions that take place are stated below.

Initiation: Here a single molecule breaks down into 2 free radicals. Only a smaller portion of freed radicals undergoes initiation, but it is sufficient to produce free radicals that are necessary to carry forward the entire reaction.

Abstraction of Hydrogen: Here the second molecule becomes a free radical as it removes a hydrogen atom from another molecule.

Radical Decomposition: Here free radicals break into other free radical and an alkane. This reaction gives rise to alkene products.

Radical Addition: This reaction results in the formation of aromatic products. Here radical reacts with an alkene to produce a free radical.

Termination: Here 2 radicals react with each other to form products that are not free radicals. This reaction results in two forms namely recombination and disproportionation.

What is cracking organic chemistry?

What is cracking used for?

What happens during cracking?

Why is cracking so important?

For two key reasons, cracking is important: It helps balance the availability of fractions with the demand for them. When cracking transforms bigger hydrocarbons into smaller hydrocarbons, the fuel supply is increased. That helps to balance demand with supply.

What is needed for cracking?

Cracking is the term given for splitting up large clusters of hydrocarbons into smaller and more functional pieces. This is accomplished by using high pressures and temperatures in the presence of a catalyst, without a catalyst, or lower temperatures and pressures. It is only one way this particular molecule could break up.