Alkali metals belong to the s-block elements occupying the leftmost side of the periodic table. Alkali metals readily lose electrons, making them count among the most reactive elements on earth. In this article, we will explain the electronic configurations, ionization enthalpy, hydration enthalpy and atomic, ionic radii and other physical and chemical properties of the group one alkali metals.

What are Alkali Metals?

In general ‘alkali’ refers to the basic or alkaline nature of their metal hydroxides. The compounds are called alkali metals because when they react with water they usually form alkalies which are nothing but strong bases that can easily neutralize acids.

However, the main reason why hydrogen (H) is not considered as an alkali metal is that it is mostly found as a gas when the temperature and pressure are normal. Hydrogen can show properties or transform into an alkali metal when it is exposed to extremely high pressure. 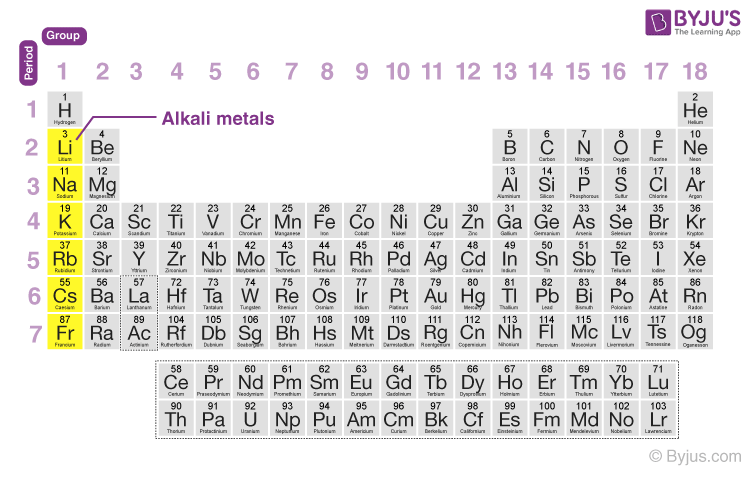 Alkali Metals are very reactive and are present in the form of compounds only. They are electropositive metals with unit valence.

Down the column, the nuclear charge increases and a new orbital gets added to each alkali atom. Here, we have discussed some important trends in physical properties of alkali metals as we go down the column.

Atomic and Ionic Radii of Elements

Atomic and ionic radii of elements increase, regularly down the column. Also, every alkali metal has the largest radii than any other element in the corresponding period.

Alkali metals readily lose an electron and become cationic. The cationic radius is smaller than the neutral atom. The relative ionic radii also increase down the column.

Having the largest radius and volume, alkali elements have the lowest density. So they are very soft and can be cut with a knife. Lithium, sodium and potassium are lighter than water. Potassium has the lowest density among alkali metals.

Alkali metals shall donate the single valence electron to get a noble gas configuration. Thus they are all univalent electropositive metals. Ionization energy needed for the removal of the valence electron will be highest for the small lithium atom.

With increasing atomic size, the valence electron gets shielded by the inner electrons and becomes easily removable with less energy requirement. Hence the ionization energy decreases with an increasing atomic number. 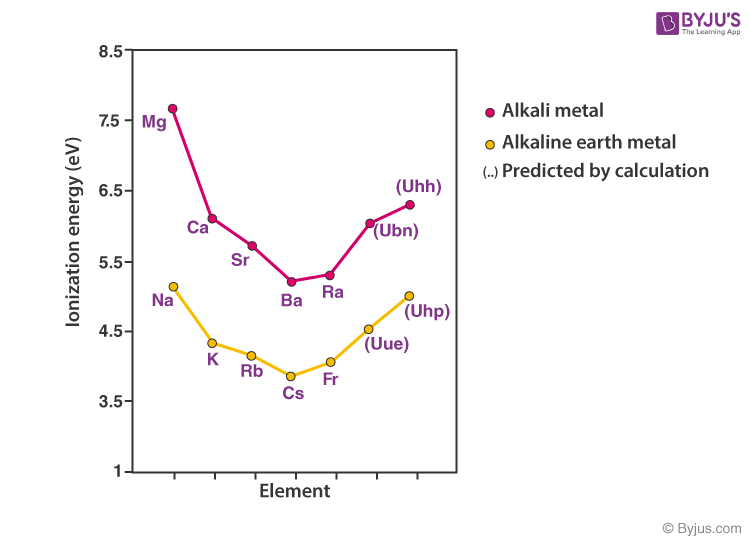 Lithium-ion is the most soluble and the solubility decreases with increasing size so that Cesium ion is the least water-soluble alkali metal ion. Solubility in water is related to the ionic nature and size. Smaller ions have higher charge density and can be solvated by more water molecules. This releases a higher enthalpy of hydration and makes the hydrated ions more stable.

The substances that can donate electrons are reducing agents. Reducing ability is, related to the ease of electron donation or lower ionization energy.

As ionization energy decreases down the column, reducing property is expected to increase from Lithium to Cesium. While, reducing ability increases from Sodium to Cesium, Lithium has the highest reduction potential (-3.04V) and is the strongest reducing agent of all elements.

Lithium, being the smallest ion, its hydration enthalpy is very high than others and compensates more than its higher ionization enthalpy: ENa ˂ EK ˂ ERb ˂ ECs ˂ RLi

In s-block elements, the energy needed for an electronic transition between the available energy levels falls in the visible spectrum region.

So, on heating, they produce a characteristic colour to the flame reflective of their emission or absorption spectrum and can be used for their identification.

Why are Melting and Boiling Points of Alkali Metals Low?

These metals are highly electropositive and form compounds which are ionic in nature. Here, we will talk about the different compounds of alkali metals and their general characteristics.

Alkali metals can react with even atmospheric nitrogen to form nitrides.

Alkali metals react with atmospheric oxygen and get tarnished of their shining nature. They burn with oxygen to form oxides. But, the nature of oxides formed is different.

Oxygen has a different oxidation state in them. Smaller Lithium forms a normal oxide, while sodium forms peroxides and the larger atoms form superoxides.

Since the alkali metals react with nitrogen, oxygen and water in the air, they are always stored under kerosene.

The reaction of Alkali Metal with Water

Alkali metals react with water to form basic hydroxides and liberate hydrogen. The reaction of the metal is exothermic and the enthalpy increases from lithium to cesium. Alkali metal floats on the water during the reaction.

The density of Sodium and potassium are lower than water. In heavier alkali metal, reaction enthalpy is high such that the metal gets melted and raises to the surface. Hence, the reaction with water becomes faster, highly exothermic, and explosive leading to fire from lithium to cesium.

With the largest electrode potential and high hydration energy, lithium is expected to be more reactive and highly exothermic. Instead, lithium reaction with water is slow and not explosive. Lithium has higher ionization energy and more covalent than rest of the alkali metal ions and so its solubility and the amount reacting will be limited. Cesium is ionic and soluble in water.

Moreover, the enthalpy of reaction is higher than that the latent heat of fusion. So the cesium melts into liquid increasing the amount reacting leading to more reaction as a cycle. Alkali metals can replace hydrogen from any proton donor molecules like alkynes, ammonia, alcohol etc.

Metal and their oxides react with water to ultimately yield hydroxides.

The hydroxides are alkaline which react with carbon dioxide to carbonates.

Sulphates except lithium are soluble in water. Sulphates can be reduced by carbon to sulphide. Forms double salts with trivalent metal sulphates (alum).

Nitrates are soluble in water and on heating except lithium nitrate decomposes to nitrites.

Alkali metals react vigorously with all the halogens to form solid ionic halides with a definite crystal structure. Reactivity decreases from fluorine to iodine. Lithium halides are an exception with more covalent bonding because of the high polarization of the small covalent ion on the electron cloud of the halogen anion as indicated by the Fajan’s rule.

The Reaction of Alkali Metals with Liquid Ammonia

Alkali metals ionize into cations and electrons in liquid ammonia. The cation and the electrons get solvated by the ammonia molecules. The solution is electrically conductive, reductive, and paramagnetic.

The solvated electrons absorb in the visible region and the solution turns blue in colour. On standing, colour changes into bronze colour and the solution becomes diamagnetic. In dilute solutions, the cation, electron and ammonia react to form sodamide and hydrogen gas.

Dry ammonia gas reacts with hot metal to form an amide. The amide is hydrolyzed to ammonia.

The usual method of extraction is not applicable to the extraction of alkali metals. Being the highest electropositive metals, displacement by other metals and electrolysis are not applicable. Also, high electrode potential restricts reducing agents like carbon to reduce them.

In electrolysis of aqueous solution, hydrogen ions get preferentially reduced to gaseous hydrogen than sodium ion. Hence, Sodium and potassium are obtained only by the electrolysis of the fused salts of sodium hydroxide and sodium chloride. Alkali metals form alloys with themselves, other metals, and amalgams with mercury.

Lithium differs from other alkali metal it has more covalent nature due to its smallest size, highest ionization energy, strongest electropositive and polarizing nature. Also, lithium has the strongest reducing character because of its smaller size, larger solubility, and highest electrode potential.

Diagonal Relationship of Lithium with Magnesium

Peroxides of Sodium and Potassium:

Controlled oxidation of alkali metals like sodium and potassium with moisture-free oxygen gas at around 300°C gives peroxides.

Alkali metal peroxides are used to produce other peroxides, bleaching, preparing perborate and purification of air in small spaces.

It is prepared by heating potassium with excess oxygen or passing ozone through potassium Hydroxide. It is an orange solid and paramagnetic. Superoxides of alkali metals are a powerful oxidizing agent due to the release of hydrogen peroxide and oxygen in aqueous solution.

On heating, bicarbonate produces sodium carbonate. Calcium oxide on treatment with water gives calcium hydroxide which on treating with the byproduct releases ammonia for reuse.

Sodium bicarbonate is precipitated out of a concentrated aqueous solution of sodium carbonate by carbon dioxide.

The aqueous solution is alkaline. The bicarbonate ion is amphiprotic i.e. both proton donor and acceptor.

Baking soda is a mixture of sodium bicarbonate and weak solid organic acids like tartaric acid and a diluent like cornstarch. The mixture produces carbon dioxide by the reaction between the acid and the carbonate giving a porous structure in baking products.

Hydroxides are produced by the electrolysis of an aqueous solution of brine. Hydrogen and chlorine are obtained as the by-products. Hydroxides of alkali metals are strong bases. They are deliquescent and form carbonate by reacting with carbon dioxide. Some metal salts of Zn, Al, precipitate metallic hydroxides, which dissolve in excess alkali.