What is Qualitative Analysis?

Quantitative analysis is an analysis method used to determine the number of elements or molecules produced during a chemical reaction.  Organic compounds are comprised of carbon, hydrogen, oxygen, nitrogen, phosphorus, sulphur and halogens. The various methods used for the measurement of percentage composition of elements in an organic compound are explained here.

Detection of C and H

C and H are detected by heating the compound with CuO in a dry test tube. They are oxidised to CO2 and H2O respectively. If the CO2 turns lime water milky, and H2O turns anhydrous CuSO4 blue, then the presence of C and H is confirmed. 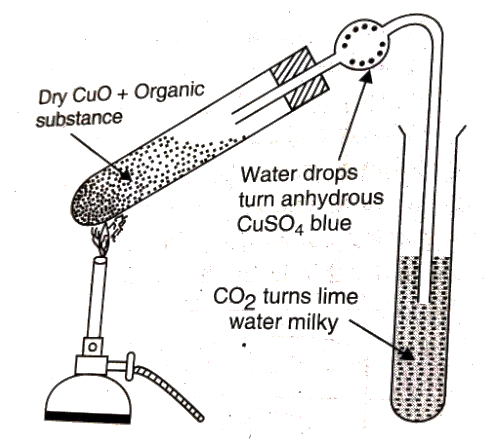 Detection of Carbon and Hydrogen

The organic compound is heated with an oxidising agent to oxidise phosphorous to phosphate. The solution is then boiled with concentrated HNO3 and treated with ammonium molybdate. Yellow precipitate confirms the presence of phosphorous.

The reaction is given below,

Quantitative analysis is more towards finding out how much of the elements are present, that is, their amounts.

Estimation of C and H

A known mass of the compound is heated with CuO. The carbon present is oxidised to CO2 and hydrogen to H2O. The CO2 is absorbed in KOH solution, while H2O is absorbed by anhydrous CaCl2 and they are weighed.

A known mass of the compound is heated with Conc. HNO3 in the presence of AgNO3 in a hard glass tube called Carius tube. C and H are oxidised to CO2 and H2O. The halogen forms the corresponding AgX. It is filtered, dried and weighed. 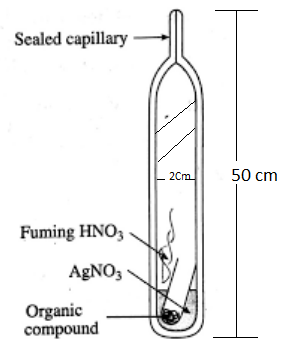 Estimation of Halogens by Carius method

Let the mass of the given organic compound be m g.

A known mass of the compound is heated with conc. HNO3 in the presence of BaCl2 solution in Carius tube. Sulphur is oxidised to H2SO4 and precipitated as BaSO4. It is then dried and weighed.

A known mass of the compound is heated with HNO3 in a Carius tube, which oxidises phosphorous to phosphoric acid. It is then precipitated as ammonium phosphomolybdate ((NH4)3PO4.12MoO3) by adding NH3 and ammonium molybdate ((NH4)2MoO4). It is filtered, dried and weighed.

Estimation of Nitrogen by Dumas Method

A known mass of the compound is heated with CuO in an atmosphere of CO2, which yields free nitrogen along with CO2 and H2O.

The gases are passed over a hot copper gauze to convert trace amounts of nitrogen oxides to N2. The gaseous mixture is collected over a solution of KOH which absorbs CO2, and nitrogen is collected in the upper part of the graduated tube. 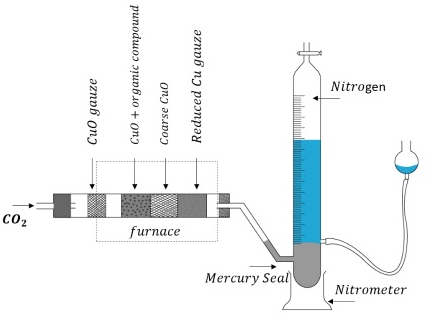 Estimation of Nitrogen by Dumas Method

Let the volume of N2 collected be V1 mL.

Where P1 and V1 are the pressure and volume of N2.

Percentage of N would be,

Estimation of Nitrogen by Kjeldahl Method

CuSO4 acts as a catalyst, while K2SO4 raises the boiling point of sulphuric acid. The nitrogen in the compound is quantitatively converted to (NH4)2SO4. The resulting mixture is reacted with an excess of NaOH solution and the NH3 so evolved, is passed into a known but the excess volume of standard acid.

The acid left unreacted is estimated by titration with some standard alkali. Thus the percentage of nitrogen can be calculated. 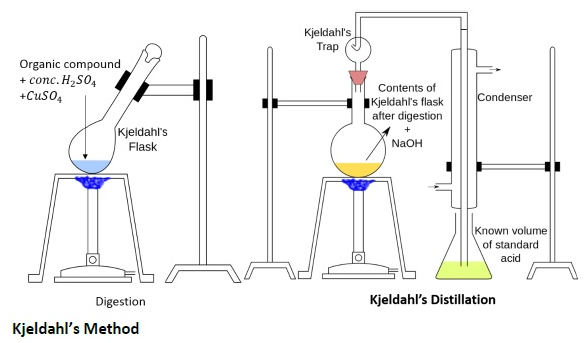 Estimation of Nitrogen by Kjeldahl Method

The reactions are given below:

Calculation of the percentage of N

Let the mass of the organic compound be mg. 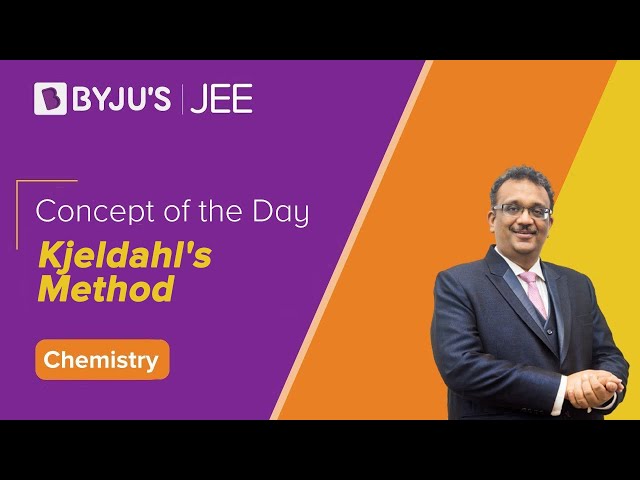 A known mass of the compound is decomposed by heating it in the presence of N2 gas. The mixture of gases so produced is passed over red hot coke. This is done so that all the O2 is converted to CO. This mixture is heated with I2O5 in which CO is oxidised to CO2 liberating I2.

The reactions are given below,

What is meant by qualitative analysis?

Qualitative analysis determines the percentage composition of elements present in a compound.

Which method is used to estimate carbon and hydrogen?

Lower reduction potential of an element implies that the element gets oxidized easily.

Which method is used for the estimation of nitrogen?

Dumas method is used for the estimation of hydrogen. Nitrogen gas is released in its free form, confirming the presence of nitrogen.

What is the catalyst used in Kjeldahl’s method for the estimation of nitrogen?

CuSO4 is used as a catalyst for the estimation of nitrogen in Kjeldahl’s method.
Test your Knowledge on Organic compounds
Q5