Hardness of Water - Temporary and Permanent Hardness in Water

The hardness of water is due to the presence of soluble bicarbonates, chlorides and sulfates of calcium and magnesium. Water which does not give lather with soap is hard water.

Water is the most important compound that is needed for the survival of life on earth. Water is present in the oceans, rivers, ponds, lakes, glaciers, etc. Rainwater is considered pure water because it does not contain any salt dissolved in it thought there are dissolved gases present.

Water can be classified as hard water and soft water. 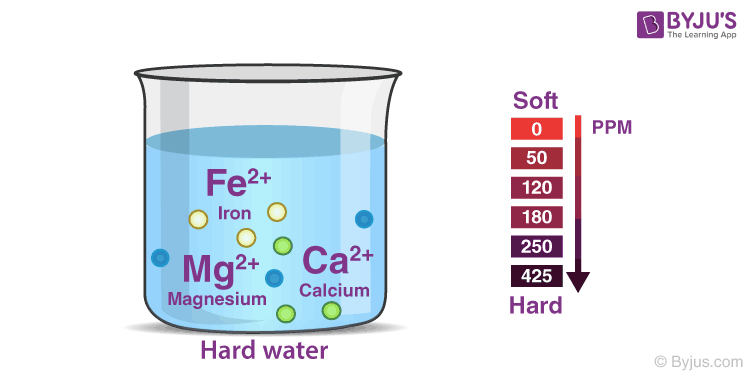 What is Hard Water?

Hard water has high mineral content. It is formed when water percolates through the deposits of chalk and limestone which are made up of magnesium and calcium carbonates. It does not lather with soap, so it is not suitable for laundry purposes.

The hardness of water is harmful to the boilers as the deposition of salts occurs, which reduces the efficiency of the boiler. Hard water is safe to drink but using over a long interval of time can lead to many problems like:

Types of Hardness of Water

The hardness of water can be classified into two types:

The presence of magnesium and calcium carbonates in water makes it temporarily hard. In this case, the hardness in water can be removed by boiling the water.

When we boil water the soluble salts of Mg(HCO3)2 is converted to Mg(OH)2 which is insoluble and hence gets precipitated and is removed. After filtration, the water we get is soft water.

When the soluble salts of magnesium and calcium are present in the form of chlorides and sulphides in water, we call it permanent hardness because this hardness cannot be removed by boiling.

We can remove this hardness by treating the water with washing soda. Insoluble carbonates are formed when washing soda reacts with the sulphide and chloride salts of magnesium and calcium and thus, hard water is converted to soft water.

Soluble bicarbonates are converted into insoluble carbonates which are removed by filtration.

Calcium hydroxide is Clark’s reagent. It removes the hardness of water by converting bicarbonates into carbonate.

How to Remove Permanent Hardness of Water?

In this method, sodium aluminum ortho silicate known as permutit or zeolite is used to remove the permanent hardness of water.

In this method, sodium-hexa-meta-phosphate (NaPO3)6 known as Calgon is used. The hardness in water is removed by the adsorption of Ca++ and Mg++ ions.

Some of the most common signs of hard water include:

Test Your Knowledge On Hardness Of Water Types And Removal!
Q5